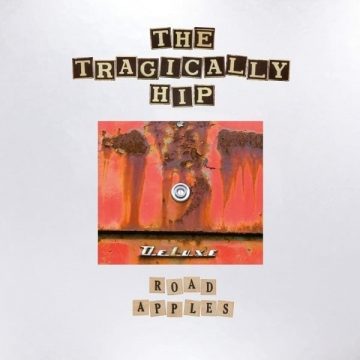 “I had a job before this… In fact, it was that job that got me into this.” If you know I speak of an aquarium with lots of money from the government, then you would also know that it was huge. So huge, we gather 30 years on for a celebration into a sophomore record, how a chicken salad sandwich of a girl, and how the west was won at the Roxy in Los Angeles. This a grand celebration for The Tragically Hip and that sophomore record; Road Apples (30th Anniversary Deluxe Edition), released just a little over four years since the loss of beloved Gord Downie.

If you have spent the last 30 years following The Tragically Hip, you just might know I am speaking of a B-side to the “Long Time Running” single released in 1991 that circulated over the years from cassette tapes to YouTube. This is Live At The Roxy, recorded in Los Angeles on May 3, 1991, with immaculate sound captured in real time on a 2-inch 24-track tape machine. There is a good amount of in-between song banter, but when that happens with this band, we call it a “Workshop”. “Highway Girl” and “All Canadian Surf Club” feature references to the yet to be, and someday recorded, “Locked In The Trunk Of A Car” and “At The Hundredth Meridian” respectively, and both songs would later appear on their next release Fully Completely.

The most famous of these “Workshop” moments would be immortalized in the middle section of “New Orleans Is Sinking” known as “The Killer Whale Tank”. Gord Downie exercises his rite of passage and prerogative to tell a satirical story coming out of nowhere. I predicted Live At The Roxy to be included here in my last Tragically Hip review for Saskadelphia, an independent EP released earlier this year. That now leaves us to go the 2021 remaster of Road Apples.

The opening track, “Little Bones” is something we are all very familiar with, so by default it becomes my go-to choice for examination. If you are a major fan of the band, you could choose other songs like the sensitive fan favourite “Fiddler’s Green” and hear the remastered improvements, but for me it is lead single “Little Bones” where I can hear the incredible adjustments making the listening experience much better than we all listened to over the past few decades on Canadian radio. It is moments like this, when one puts on headphones and pays close attention to a song that has always been there for the taking. It’s like it is 1991 and hearing “Little Bones” for the first time, instead of the song becoming the signal for me to change the dial on the radio. I can hear all the instruments and vocals coming out like never before and though it is an expectation, it a pleasant one.

I am assuming the big fans of The Tragically Hip will really appreciate the final portion of this $100 plus anniversary package; the unreleased demos, outtakes, and alternate versions from the Road Apples sessions. It is here where one can spot differences from the versions known from the original release but not me. I really like “Angst The Planks” which apparently is an earlier version of “Cordelia” and a much better version they should have left as is. The same goes for “If You Live Here”, another well-bootlegged fan favourite that sounds like something from their eponymous EP and first release in 1987.

There is a lot of fun going on here for both Tragically Hip fans or music lovers looking for some education. Road Apples is a force that cannot be denied. It is a domestic privilege to tap into our own and become amused at the notion of the band not breaking the American market. I think with every passing year since we lost Gord Downie, we can sit back and embrace the big Tragically Hip fans, and they can see me and the many others who just stood by through the years. We can all come together this time and embrace the singer’s righteous storytelling in combination with the band’s instrumental drive. It is almost Christmas and I encourage you to treat yourself to a vinyl edition purchase of the Road Apples (30th Anniversary Deluxe Edition). It’s time to go into the “Killer Whale Tank” but this time have our turntables to once again bring out the tale.