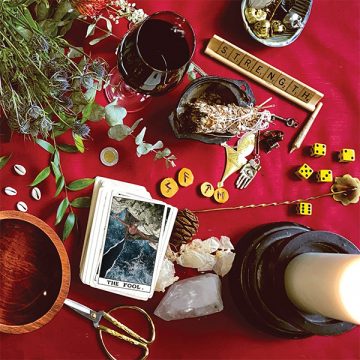 Toronto-based rock sensation, Sate, has returned with her newest album, The Fool. It follows the release of a string of singles as far back as 2019 and is the singer’s first full-length release since 2017’s RedBlack&Blue.

The Fool opens on a cinematic tone with “0: loofeht”, an ambient track of footsteps and other edited sound clips. There are several similar songs on the album, giving the sense that they develop the themes of the lyrical content, giving The Fool a greater sense of life, rather than just being a collection of songs. That being said, the assortment of songs on The Fool is an incredibly strong demonstration of Sate’s songwriting and performance power. The first song, “Dirty Little Lie” is a haunting and gritty song driven by pulsing drums, the distorted twang of a slithering guitar, and Sate’s dynamic vocals. It will have you imaging a collaborative project between Queens Of The Stone Age, Nine Inch Nails, and Marilyn Manson, fronted by Bishop Briggs. The sleazy alternative rock energy of the song is further developed through a unique twist on the blues, along with vocals that feel reminiscent of gospel and soul music.

Sate’s unique blend of songwriting continues to develop throughout the album. “Howler”, for example, takes the same distorted rock flare and pairs it with sickly sweet pop vocal melodies, similar to what Miley Cyrus once attempted to do upon her first reinvention, but never quite pulled off at the level of Sate. Additionally, the emotionally driven ballad, “Weight On Me”, the shuffling “The World”, and the up-tempo rocker, “Nobody” – featuring Toronto punk outfit, The OBGMs – are all standout tracks on The Fool.

If you find that most rock of today to be too vanilla while alternative rock has gone softer and more poppy than ever before, Sate has answered your calls with The Fool. Effortlessly blending masterfully curated tones and raw, unbridled attitude with elements from a wide range of influences, Sate has raised the benchmark for up-and-coming artists of all types, but especially in rock and alternative rock/pop. Honestly, the guitar tone on “Dirty Little Lie” hits hard . The Fool is a must-hear record that very well should propel Sate to heights beyond her already impressive stature.

A passion for music has always been a part of Gerrod’s life. As a young boy, he was raised on a steady diet of the music from The Chili Peppers, Aerosmith, The Stones, Prince, and others from his mum. Raised in the GTA, Gerrod continued to foster his love for music by attending a wide range of concerts and learning the drums. His unapologetic passion for music has no bounds and has spread to a wide variety of styles, whether it be the 90’s rock that sound tracked his teenage years, the jazz he studied in university, or his newfound love for hip-hop. He recently received his bachelors in music and education from York University and is passionate about writing and reviewing good (and less than good) music. Gerrod is also the drummer and songwriter for a Toronto based rock & roll band, One In The Chamber.
RELATED ARTICLES
album reviewalbum reviewshowler
8.0