SPILL ALBUM REVIEW: THE TRAGICALLY HIP – LIVE AT THE ROXY 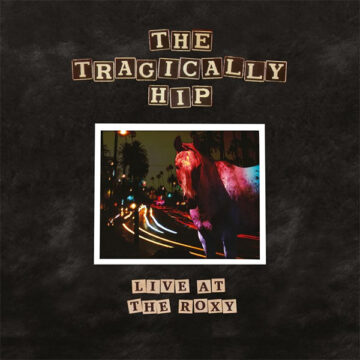 The Tragically Hip
Live At The Roxy
Universal Music Canada

1991 was a momentous year for The Tragically Hip. The five-piece had months earlier released their sophomore album, Road Apples, the follow-up to their debut LP, Up To Here. On May 3rd, 1991, during The Hip’s extensive touring, in support of Road Apples, the band touched down at the famous Roxy Theatre in Hollywood, California. Gord and the boys were in fine form that night, as producer Don Smith (also the producer of both LP’s) mixed and recorded the show from a mobile studio.

What Smith captured that night has only been available as a bootleg for decades, until now, with the official release of Live At The Roxy. What took so long is anybody’s guess, but the sound quality, the tight, fun, energetic performance emitted from the band, is one for the ages.

In the 15 songs delivered that night, listen closely and you’ll hear easter egg hints of lyrics that will shine through on The Hip’s next, and arguably best studio album, 1992’s Fully Completely. Unlike some live recordings, the crowd noise isn’t captured quite too much to take away from hearing the band’s performance. The intimate sound is amazingly crystal clear and one can discover the intricate details of each band member as they perform.

Highlights include “Trickle Down”, “The Luxury”, and of course, “New Orleans Is Sinking”, with Gord Downie’s Thorogood-esque epic storytelling of Shamu & Bartholomew and their Killer Whale tank, which has been the stuff of legends since its recording. Another stand-out is “Highway Girl”, from their 1987 self-titled EP, where Gord gets very dark and tells the tale of Pauline living next to the freeway and the dangers of firearms. It’s quite the story.

Live At The Roxy is The Tragically Hip’s best live album and brings new life to some old classics. It captures the rock’n roll essence of the band in their prime in a magnificent way, shortly before they’d go to sell-out huge venues and arenas across the country and become Canadian rock royalty.

SPILL ALBUM REVIEW: THE TRAGICALLY HIP – LIVE AT THE ROXY

John Graham is a Vancouver-area resident who typically spends most days admiring music of all genres. When not listening to music, John is usually at a live show, somewhere in the bowels of Vancouver.
RELATED ARTICLES
album reviewalbum reviewsthe tragically hip
8.0