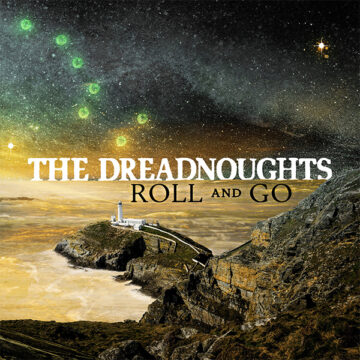 The Dreadnoughts have been baptized with a variety of classifications, from “cluster folk” to “polka punk” to “ciderpunk”. Their new album, Roll and Go, pulls together all the genres they have previously handled with expertise to create an impressive anthology of genre-transcending tunes.

Roll and Go was written in the early days of the pandemic, and later recorded in just nine days with no formal practice before that – an impressive feat for an album so musically and lyrically complex.

The album fittingly begins with a love song to cider to the tune of “Twinkle, Twinkle, Little Star”, and takes the listener on a journey through folk, punk, polka, shanty – with even a dash of hip hop and dub.

Standout tracks include “Problem”, a tribute to self-proclaimed “gypsy punks” Gogol Bordello, and “The Storm”, a ballad which builds to a crescendo with an emotionally stirring bridge.

The Dreadnoughts’ creativity and versatility of subject matter is in fine form here. The album takes a break from songs about alcohol to indulge in nostalgia for the polka dances of the ‘70s on “Vicki’s Polka”. “Battleford 1885” is a particularly powerful song lyrically, as it addresses the hanging of the Cree warriors known as the Battleford Eight.

Full of heart and swagger, the attitude of the album is perhaps best summed up by the lyric “Fashions rise and fall, dear, but polka will never die.”