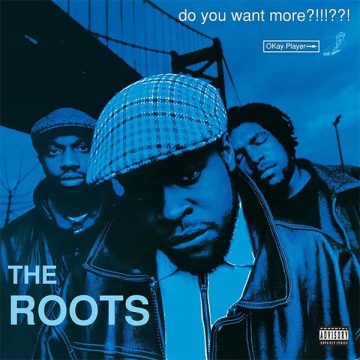 Remaining a hip-hop staple, The Roots have released their latest album to be reissued in a deluxe package. Turning their attention to their underground and universally acclaimed debut, Do You Want More?!!!??!, hip-hop’s premier band have included the original album, now pressed on vinyl, along with eighteen bonus tracks, most of which have never been available digitally and five of which that remain entirely unreleased until now.

Originally released in 1995, Do You Want More?!!!??! is a true masterpiece that saw The Roots, led by drummer Questlove, and MC’s Black Thought and Malik B, follow in the footsteps of A Tribe Called Quest to deliver jazz and funk infused hip-hop. While not an overnight success, Do You Want more?!!!??! established The Roots as a cult favourite and remains a classic to this day. From the undeniable groove of “Proceed”, the chill vibes of “Mellow My Man”, the infectious rhythms of “I Remain Calm” to the swagger of “Datskat”, the bombast of the title track, and the live energy of “Essaywhuman?!!!??!”, The Roots’ debut remains fresh and unique, even over a quarter century later.

Much of the bonus material added to the reissue consists of remixes, on top of previously unreleased songs. While there is not a bad remix at all across the tracklisting, few, if any surpass the originality and excitement of the original recordings. Despite that, there is still some gold hidden amongst the wave of remixes. “Proceed II”, “Proceed III”, “Proceed IV”, and “Proceed V” fall into the latter category and double down on the hip-hop jazz fusion, while unreleased songs like “In Your Dreams Kid (I’m Every MC)” and “Pffat Time” further the creative well that The Roots built their careers and sonic identity on. Additionally, the lead single for the reissue, “Lazy Afternoon (Alternate Version)” adds to the record. While there is much among the additionally material to enjoy, I would have preferred less remixes and would have welcomed live material from ‘95/96.

Do You Want More?!!!??! stands strong as a unique album from a time where hip-hop was digging deep into samples and digital tones. With a decent collection of additional material, the reissue of The Root’s debut may not turn heads the way the original album did, and still does, but it provides a wealth that diehard fans will love. Regardless on your thoughts of the bonus material, Do You Want more?!!!??! is a classic album that sets The Roots aside as a truly one-of-a-kind band.

A passion for music has always been a part of Gerrod’s life. As a young boy, he was raised on a steady diet of the music from The Chili Peppers, Aerosmith, The Stones, Prince, and others from his mum. Raised in the GTA, Gerrod continued to foster his love for music by attending a wide range of concerts and learning the drums. His unapologetic passion for music has no bounds and has spread to a wide variety of styles, whether it be the 90’s rock that sound tracked his teenage years, the jazz he studied in university, or his newfound love for hip-hop. He recently received his bachelors in music and education from York University and is passionate about writing and reviewing good (and less than good) music. Gerrod is also the drummer and songwriter for a Toronto based rock & roll band, One In The Chamber.
RELATED ARTICLES
album reviewalbum reviewsthe roots
7.0