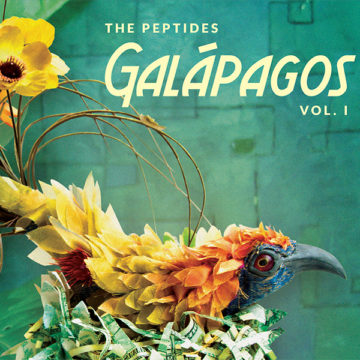 The PepTides
Galápagos Vol. I
Independent

One of early 2019’s pleasant musical surprises is Galápagos Vol. 1, the new album from Ottawa’s The PepTides.

Galápagos Vol. 1 is a salute to Kurt Vonnegut’s 1985 novel Galapagos, and over the course of the album, The PepTides’ five vocalists and four musicians weave a soundtrack for the darkly hilarious story, which includes a global financial crisis, World War III, an ill-fated nature cruise, and a million years of evolution.

Combining elements of funk, soul, and new wave, the eclectic nine-member outfit delivers a solid set of ten original tracks filled with musical surprises at every turn. Many interesting things are going on here, including a backing church choir on “Mary Mother Mary” and highly danceable beats in the catchy and infectious first single “We Fell in Love for the Very Last Time”, which is currently receiving heavy airplay on a number of radio stations in Canada.

The PepTides have already charmed audiences with their genre-defying theatrical live presentation and dance moves at both NXNE and RBC Bluesfest. They are scheduled to play some local shows in the Ottawa area to celebrate the release of Galápagos Vol. 1.

Gerry Young is President of Current Records and Management, and author of the 2011 biography Pop Goes The Weasel: Rock And Roll Off The Record, available at Indigo/Chapters, Barnes & Noble, and Amazon.com. He has recorded and managed Juno Award winning bands Martha And The Muffins and The Parachute Club among others.
RELATED ARTICLES
album reviewalbum reviewsgalápagos vol. I
7.0