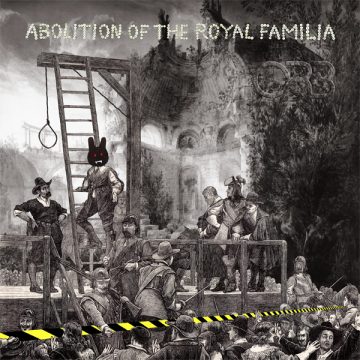 The Orb
Abolition Of The Royal Familia
Cooking Vinyl

I find it hard to believe that The Orb have been making records for almost 30 years. Their debut album, The Orb’s Adventures Beyond The Ultraworld, was released in 1991. Now, in 2020, The Orb have released their 16th studio album with the rather provocative title, Abolition Of The Royal Familia. The core of The Orb has been and continues to be Alex Paterson, who continues to work with various artists on albums under the name, The Orb. However, the new album, Abolition Of The Royal Familia also marks Michael’s promotion to full time member, and officially one half of The Orb.

There are many guests on the new album, including Roger Eno, Steve Hillage, Miquette Giraudy (Gong and System 7),and David Harrow (On U-Sound). Even Paterson’s dog, Ruby makes an appearance.  But in the end, it is still an Orb album. That means a combination of ambient, house, pop, hip hop, and of course dub. There are no big surprises on this album, but that is fine.

Abolition Of The Royal Familia is a concept album, of sorts. Dipping into the pages of history, The Orb has come up with an album that revisits and is critical of the Royal Family’s endorsement of The East India Company’s opium trade during the 18th and 19th century. This action caused a great deal of strife for India and caused two wars with China. The Orb are clever enough to draw parallels to today’s economic and political structure, well at least before COVID-19.

Their use of spoken word and sound bites is amazing, and the music often conveys the overall sentiment of the song. Often it is left entirely up to the music. Take for example “Hawk Kings”, a tribute to Stephen Hawkings. It is a beautiful song, with an incredible melody. And humour is not lacking, with songs such as “Honey Moonies – Brain Washed At Area 49 Mix”

The last song on the album, “Slave ‘Till The Day You Die No Matter What You Buy” is a stark warning and their take of Jello Biafra’s “Stay In Your Home”. Very prophetic, which includes the rather eerie statement “No more than two people will gather anywhere  without permission”.

Overall, another great album from The Orb. Abolition Of The Royal Familia is an album for today. It is topical and musically interesting. Although it is typical of The Orb, it is still full of twists and turns. A wonderful accomplishment.

Born and raised in Whitby, Aaron discovered music through his love of The Beatles. This led to a career in radio, writing for various publications, and ultimately a radio show about The Beatles (Beatles Universe), which ran for over four years. When not immersed in music, Aaron enjoys spending time with the loves of his life -- his wife Andrea, and daughters Emily and Linda (all of whom have an intense love of music too).
RELATED ARTICLES
abolition of the royal familiaalbum reviewalbum reviews

by Aaron Badgley on May 6, 2020
MISSING FOR DAZE…WHERE YOU GONE? A CONVERSATION WITH ALEX PATERSON OF THE ORB “Basically what we are doing here is surviving, as much [...]