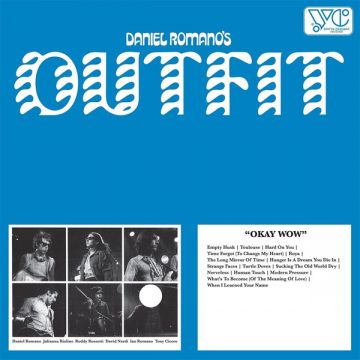 Daniel Romano reminds one of the artists of old. Some of us remember artists, such as Waylon Jennings, Willie Nelson, The Beatles, and so many more who used to release two or even three albums a year.  Okay, Wow is his second album this year, following the studio album Visions Of The Higher Dream released in early March. Okay, Wow was recorded early as part of his quite extensive tour of Scandinavia last year, backed by The Outfit.

I am more than a little surprised that this is his first live album. Anyone who has seen Romano live knows how dynamic he is and how his songs take on a new and different life in concert. I should point out that while he was touring with The Outfit, he also did a number of shows with his other band, Ancient Shapes. He is one hell of a busy guy.

Even though he is busy, the quality of the music never suffers. As evidenced on this album, his shows were energetic, fun, and exciting. The band is tight, and Romano has never sounded better. For Okay, Wow the songs play without any breaks, creating a live atmosphere. Special nod to my favourite track on the album, “Toulouse”. This version just cooks.

Here he touches on his back catalogue, which is quite extensive. Even though the songs are from various albums, he creates a cohesive flow. The songs fit together like a perfect puzzle. He performs tracks from the two downloadable albums, which were available for a limited time. In fact, there is a great version of the title track of one of those albums, Nerveless.

To be honest, I am not a fan of live albums. But the great ones, The Who Live At Leeds, Live Peace In Toronto, or Viva! Roxy Music, all have one thing in common. There is a significant difference from the studio albums, but the genius of the songs is maintained. Romano does that with Okay, Wow. The songs sound new, fresh, and have enough difference to keep you, the listener, interested. That takes a great deal of talent and a great deal of confidence to pull it off. Thankfully, Romano and his band have both.

Born and raised in Whitby, Aaron discovered music through his love of The Beatles. This led to a career in radio, writing for various publications, and ultimately a radio show about The Beatles (Beatles Universe), which ran for over four years. When not immersed in music, Aaron enjoys spending time with the loves of his life -- his wife Andrea, and daughters Emily and Linda (all of whom have an intense love of music too).
RELATED ARTICLES
album reviewalbum reviewsdaniel romano
8.0