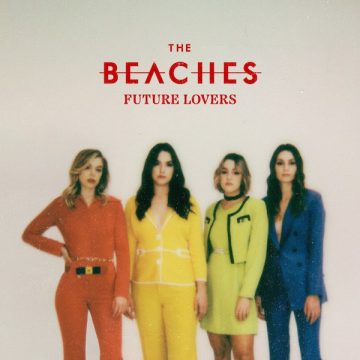 The Beaches maintain their sparkling pop-rock stride on the Future Lovers EP. Hot on the heels of 2019’s The Professional EP, Future Lovers arrives with high-calibre whimsy, glamour, and an unapologetic attitude.

If the two EPs sound similar, it’s largely due to the fact that much of Future Lovers was recorded during The Professional’s sessions, with the Toronto group recently going back to tweak and fine-tune the songs before finally putting them out.

Nonetheless, the tracks sound fresh and vital: “Blow Up,” “Let’s Go” and “Bad Behaviour” kick off the five-song collection with break-neck speed, maintaining a steady upbeat energy and a dance-worthy tempo. Featuring plenty of killer sing-along lyrics, call-and-response vocals, and catchy guitar riffs which have become cornerstones of the Beaches’ repertoire.

Future Lovers doesn’t slow things down for the track “Slow Mo,” which, despite its name, is a playfully sultry and synthy bop. (“I wish we were alone / We’d be taking off our clothes / If we were alone,” lead vocalist Jordan Miller sings.) No, it’s not until the rock-ballad closer, “You Don’t Owe Me Anything,” that the album’s frenetic pace slackens for a grand and pensive finish, with a building keyboard arrangement.

The Beaches have experienced a meteoric rise to the top of the Canadian music chain with just a debut record and a couple of EP’s under their belt; Future Lovers is another successful notch in that belt, tiding listeners over until the band’s much-anticipated sophomore effort arrives. Hopefully, it won’t be too long now.

Matt Owczarz is a freelance writer/journalist based in Mississauga, Ontario.
RELATED ARTICLES
album reviewalbum reviewsblow up
8.0