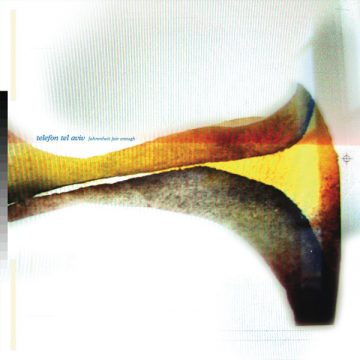 Telefon Tel Aviv reissues its September 2001 release Fahrenheit Fair Enough on Ghostly International. Joshua Eustis is currently the only member of the group, after friend and collaborator Charles Cooper passed away unexpectedly in 2009. With label mates like Tycho, Com Truise and Gold Panda, what can we expect this release to sound like? Ambient, electronic, groovy, weird, innovative? Yes to all of these and more. Eustis is surely an experimental Electronic artist but even without vocals on this album, it clearly draws from Jazz, Soul, and Hip-Hop perspectives. This album is successfully designed to sound like no one else.

Originally coming out of New Orleans in the early 2000s, Telefon Tel Aviv sought to draw on a myriad of musical influences. The New Orleans Jazz and Chicago Blues scenes were prevalent, Detroit’s Techno scene was exploding, and Eustis and Cooper were being swept off their feet by British elEctronica artists like Jega and Aphex Twin. With so much coming in from so many angles it was hard to know where to go, but they knew they wanted to be different, to stand out and, most importantly, to be proud of it — “something definitely American, and kinda Southern too,” he states on the Ghostly International website.

The album’s opener, “Reak What,” is a 1999 archive, something you would never guess from the sound of it. For a ’99 track, this feels way ahead of its time, transcending through sweeping synth lines and pulsating bass. The song, and much of the album, uses near hyper-electronic drums with snares echoing past one another, driving things into an ever-evolving sculpture. The drums and rhythmic programming collide and blend all too well with the sounds of a soft Rhodes and gliding guitar work. Halfway through the album, we come to the pretty and peaceful “Life Is All About Taking Things In And Putting Things Out.” Here, background ratchets and clicks highlight a simple and enchanting grand piano composition as if a percussionist were squirming away in the distance. Cruising toward the end of the album, “What’s The Use Of Feet If You Haven’t Got Legs?” starts off as if it were a hard Club track. The punchy kick seems to be allowing a definitive four-on-the-floor beat before the curveball comes and soundscapes break things up, mind-bending arpeggiated lines enter, enticing pads dissipate. A new form takes shape, slicing the synths, chopping the time signatures up and cracking down on any predictions you may have had.

The reissue of Fahrenheit Fair Enough is a calm and delicate masterpiece. The beauty may be subtle and the intrigue difficult to pinpoint, but isn’t it always the small things in life? Somehow everything seems to change, no hit, blip, crack or sweep seems to happen twice, yet somewhere Eustis and Cooper find a steady backbeat to keep time and order. Telefon Tel Aviv is right on top of the experimental electronic game with this 2016 album. It remains interesting and impressive that many of these reissued tracks from 2001 came before there was a roadmap for them and, arguably, before people new what to do with them. The early 2000s may have heard this music as frustrating or even annoying, but it’s safe to say that it would have been wildly misunderstood — if understood at all.

After majoring in business & entrepreneurship at UCSB and traveling the world, Andrew moved to Los Angeles to pursue music and not give up his love for surfing, hiking and yoga. He is also in a couple really cool, up and coming, indie-rock bands in LA - Mothlight & Lone Kodiak.
RELATED ARTICLES
album reviewsghostly international
8.0