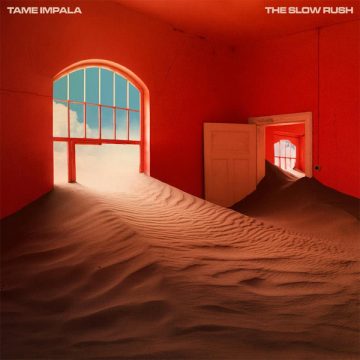 A decade ago when Tame Impala’s Innerspeaker dropped, it was if Cream had a love child with The Flaming Lips. With fuzzed out guitars, dreamy melodies and Lennonesque vocals, Kevin Parker’s one-man band became an instant critical darling.

Fast forward five years and Parker had completely reinvented his lush ‘60s inspired psychedelic rock. His revelation came while in the passenger seat of an old sedan in LA. Stoned on coke and mushrooms, he heard the Bee Gees and the emotion of the music overwhelmed and inspired him to change the musical direction of Tame Impala.

It was a bold move but the final product, Currents, was nothing short of a masterpiece, even if it did divide many fans. Gone was the guitar-based psychedelic rock, replaced with electronic disco.

With last year’s singles “Patience” and “Borderline”, the third track on The Slow Rush, it was clear that the disco direction of Currents would continue to dominate Parker’s new recordings.

The Slow Rush opens with “One More Year”, a song drenched in New Order synth-pop. From there we are transported into “Instant Destiny”, a number heavily inspired by in ‘90s R&B but with a Ringo Starr-like drum beat.

There is also an incredible element of funk on this record, more so than on any other Tame Impala release. “Breathe Deeper” and “Is it True” are by far the danciest tracks The Slow Rush has to offer. They are sure to be fan favourites at this summer’s MDMA-fueled festivals.

His long-time love of Supertramp also finds a place here with the groovy “It Might Be Time”.

Despite the overall disco vibes on the album, Parker does bring some compelling moody tracks. “On Track”, while not quite a ballad, is by far the moodiest song out of the dozen. “Tomorrow’s Dust”, which is built around an acoustic guitar riff, also offers some variety in the sonic landscape.

The centerpiece though is “Lost in Yesterday”, with its heavy bass riffs and goose bump-inducing vocal melody. It is perhaps the best vocal performance we’ve heard from Parker. Its emotive, bouncy rhythms are similar to “The Moment”, but this is on another level of brilliance. It’s theme of getting over painful memories and embracing the future is immensely powerful.

The Slow Rush is set apart from its predecessor in its overall cheery vibe. On Currents, Parker, who was moving on from a breakup and nearing 30, seemed to be at a crossroads in his life. Five years later we hear a man who still may not be fully comfortable but who has at least come to terms with himself.

It was certainly well worth its five year wait.

As a child growing up in the suburbs, Ryan found music as a way to soothe his boredom. After first hearing AC/DC at the age of 10, he was hooked on music. Tracing its roots to the ‘50s, he became obsessed with Elvis, Buddy Holly and Chuck Berry. Somehow that led to grunge, then psych-rock, then jazz, etc. The list goes on and on and his collection of vinyl records continues to grow.
RELATED ARTICLES
album reviewalbum reviewscurrents
9.0