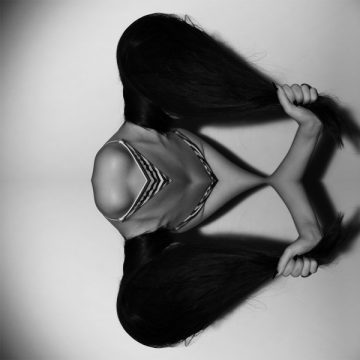 In the midst of a dissolving relationship seem to be a suitable albeit emotionally exhausting state in which to start producing an album. This appears to be the case for former Headlights member Erin Fein who makes her debut as Psychic Twin on Strange Diary, an album four years in the making. Stories of those past four years are torn from the pages of her diary and paired with upbeat synth-textured pop to create a deeply personal and surprisingly danceable soundtrack to duress.

With the past four years of her life involving moving from Illinois to Brooklyn and piecing herself together after a failed relationship you’d dare to think that Strange Diary would feel intrinsically pessimistic. Yet Fein pairs her lyrics of lost love with familiarly 80’s new wave influenced instrumentals to create a coherent and fluid exploration of her experiences. On tracks like the leading single “Lose Myself” you can’t help but bob your head in agreement with the driving drum beat before realizing that its lyrics were evidently written in the middle of a divorce. This dichotomy turns otherwise passé avant-pop songs into delicate and dark journey.

The avant-pop styling of this project can be additionally reinforced by this current evolution of Psychic Twin. By utilizing drummer Rosana Caban and channeling musicality comparable to other contemporary avant-pop sensations such as The Cocteau Twins, St. Vincent, and Grimes Psychic Twin seeks to join their ranks. Undoubtedly a labour of love Strange Diary is an interesting, familiar, and yet distinct album. Psychic Twin will be touring this fall with fellow Polyvinyl roster members STRFKR across North America.

I am an Edmonton based musicophile and photographer who loves experiencing music whether it's live or on my turntable. I play seven instruments and go to a lot of concerts.
RELATED ARTICLES
album reviewspolyvinyl recordspsychic ills
7.0