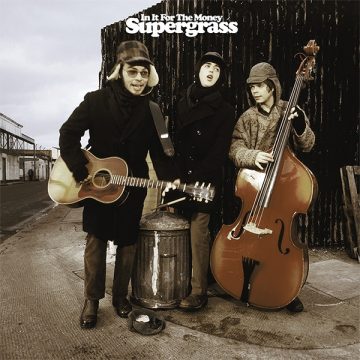 Supergrass
In It For The Money (Remastered Expanded Edition)
BMG

With no better reason for Supergrass to reform in 2019 than the fact that playing in a million-selling band can be a decent job, the act of re-issuing an album called In It for the Money makes complete sense. Despite the intended irony of its title, their second album made the Oxford band and Parlophone Records lots of money when it was originally released in 1997. Their first album had been Parlophone’s biggest-selling debut since The Beatles’ Please Please Me, but on In It for the Money, Supergrass eschewed their lucrative, teenaged novelty act for a matured focus on songwriting. Confounding conventional wisdom, the result was an era-defining, classic set of Britpop that secured the band’s longevity until their breakup in 2010.

Taking risks instead of cashing in commercially remains a hallmark of Supergrass, and the 2021 expanded edition of In It for the Money generously apportions value across all formats. Vinyl editions come in 180g and 140g plus a 12-inch single of unreleased tracks exclusive to it only. Three CDs include the album remastered from analogue tape, 20 live cuts, and 21 rarities–15 appearing for the first time.

Among these, “It’s Not Me (Early Version)” confirms just how preternaturally educated and versatile in taking on so many styles Supergrass was. Its obtuse AM radio vibe and surprise Gaz Coombes guitar solo lifted straight out of classic American country are revelatory. The spacey organ outro of “Sun Hits the Sky (Monitor Mix)” and electronic groove of “The Animal” suggest this could have been a trippy, sprawling album influenced by The Charlatans and breakbeat. Instrumental “Silver Lining” is a weepy organ meditation recalling The Telescopes and Pink Floyd with swooping guitar notes and a Ray Manzarek-like bassline. The live tracks sound like a band with three guitarists, not one.

The original album sounds fantastic, free of compression or loss on the high and low ends. Mick Quinn’s basslines cut through the mix, while they left Gaz Coombes’s classic Jagger/Bowie vocals alone. Drummer Danny Goffey sounds especially punchy, but it’s keyboardist Rob Coombes who steals the show across the entire set with his sparkling organ passages. The deluxe expanded edition of In It for the Money underscores that, like Supergrass, this landmark album ultimately transcended the Britpop label.

Charles T. Stokes is a nonprofit resource development coordinator and donor researcher based in Denver, USA. He’s also a tennis player and writer looking to make a racket with his own noises. “There are places in the world where one cannot publicly listen to or perform whatever music they choose without fear of harassment or prosecution. The freedom to write about new music is power, a privilege.”
RELATED ARTICLES
album reviewalbum reviewsbmg
8.0