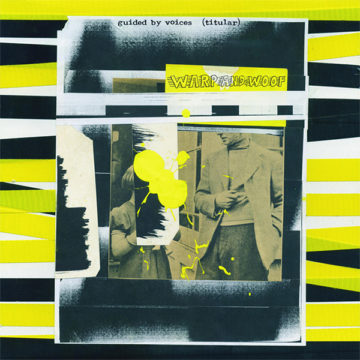 Guided By Voices new album, Warp and Woof, consists of 24 songs in 37 minutes. This is a clear indication Guided By Voices continue to do what they do best. Warp and Woof is their 27th studio album, and their second release this year (Zeppelin Over China was released in February). Warp and Woof was initially planned as a series of EPs, but in the end, it turned into an album. Two albums in one year is pretty impressive, but even more incredibly, the album was recorded during their 2018 Space Gun Tour.

Robert Pollard continues to be the driving force behind Guided By Voices, but that does not mean it is a solo effort, not by any means. Pollard wrote all the songs, and his voice is as good as ever, but the band contribute more to the overall sound. Doug Gillard’s guitar performance is effective and remarkable given the constraints of the short songs. He is able to provide  such short bursts of energy and his musicianship suits the songs perfectly. It is worth noting that he recorded some of the material in hotel rooms, in a van going 100 km/hr as well as backstage in the green room.

The same can be said for the rest of the band, who deserve a great deal of credit. Kevin March (drums, vocals), Bobby Bare Jr. (guitar) and Mark Shue (bass). They also recorded while on tour and when the recording could fit into their busy schedule.

This is power pop at its absolute best, sometimes crossing over into punk, and sometimes crossing over into psychedelia or just plain rock. This album grips the listener and refuses to let go. The fact remains that it does not sound like it was patched together during a tour, quite the opposite. This album plays as a consistent, brilliant album from beginning to end.

Musically, the band keeps the listener’s interest from beginning to end and although it rocks, there is a great deal of variety throughout. Pollard’s lyrics are brilliant, as usual, and in the end Guided By Voices has created a wonderful new album. This is a band that has been around quite a while (they formed in 1983) and has quite a history. Given that  they have been around for a while, they are still quite able to produce original, unique work. Guided By Voices’ music and lyrics continue to be relevant and intriguing.

Born and raised in Whitby, Aaron discovered music through his love of The Beatles. This led to a career in radio, writing for various publications, and ultimately a radio show about The Beatles (Beatles Universe), which ran for over four years. When not immersed in music, Aaron enjoys spending time with the loves of his life -- his wife Andrea, and daughters Emily and Linda (all of whom have an intense love of music too).
RELATED ARTICLES
album reviewalbum reviewsangelic weirdness
8.0