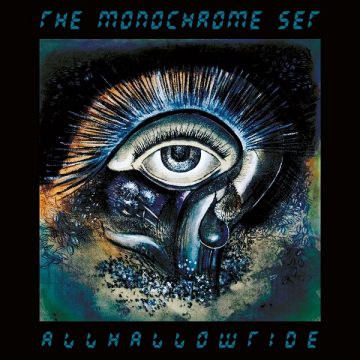 If you ever wondered what would constitute something that would bear the name of ‘intelligent pop’, The Monchrome Set would certainly fit the bill. 16 albums (including the latest one) and five decades on, they still share the same route that the so-called intelligent pop bands like Big Star or The Go-Betweens share (if you exclude the ‘anomaly’ that is Steely Dan) – critics and other musicians’ favourites and a staunch cult fan base and occasional run into the charts.

The same fate is probably awaiting Allhallowtide, their latest album that bears those trademark characteristics – some intricate melodies, impeccable musicianship, and Bid’s so characteristic vocals and lyrics most songwriters will never be able to muster.

Those in the know of the band expect and will certainly get the usual combination of melody and wit, making the likes of Jarvis Cocker, Iggy Pop and Johnny Marr among others savour this one as a musical treasure it is.

Like with any other artist of this calibre, it doesn’t really matter where you start or end listening to this one, although you can rest assured that Bid certainly had his reasons when setting up the song order. The effect will be the same – brilliant song titles (let’s start with “In A Chapel of Personal Design” or “Box of Sorrows”), equally exquisite lyrics, and melodies and music to match.

Will Bid and his companions ever get the full credit they deserve?

Formerly a lot of things, including a journalist and a translator, currently a freelance writer living in The Netherlands.
RELATED ARTICLES
album reviewalbum reviewstapete records
8.0