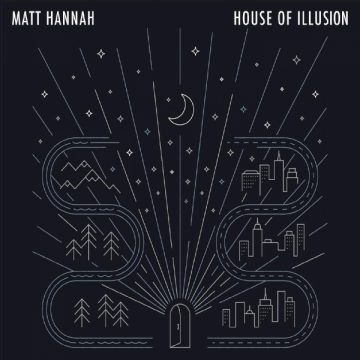 The quality of a singer-songwriter album essentially relies on two key qualities – some good melodies supported by with as best possible musicianship and arrangements that go beyond just solo acoustic guitar or piano and lyrics that are not solely self-centred and can be thus labelled as ‘navel-gazing.’ Based on his new album House of Illusion, Minnesota-based singer songwriter Matt Hannah actually has all those qualities in abundance.

His songs are both intricate and well-developed, and the arrangements, supported by some excellent musicianship, are something that can easily be labelled as intricate Americana done with ease and flair.

At the same time, Hannah’ lyrics seem to revolve around his love for the films of the Swedish legendary director Ingmar Bergman, as Hannah puts it “the desire to carve out a space of illusion—a place of magic and art—protected from the world outside.”

Quite personal on one hand, but open to listeners without being either hermetic or self-centered, making tracks like “Sidelines”, “Light Years”, or the title track quite a joy to listen to.

House of Illusion is one of the more subdued but at the same time accomplished Americana albums to be released so fat in 2022.