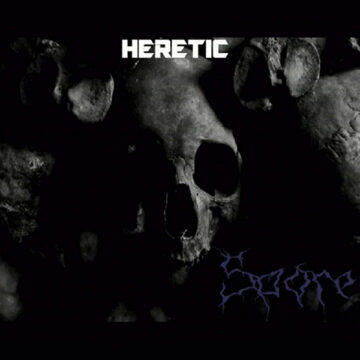 Spore is a duo composed of Deborah Fialkiewicz and John Koser. Both are established artists in the world of electronic music and both have created some incredible art in their careers. However, both artists take the genre a step forward with their new album. They have worked together in the past, but with Heretic they have taken their respective pasts and brought them together with incredible success. Heretic is their latest offering, a full-length album, originally released as a stream/download but now officially available on CD through Hamfuggi Records. Heretic is an album of various sounds and styles. It is not easily summed up, except to say that it is electronic-based and features a great many layered sounds.

The album opens with “N.B.C.”, which makes great use of television commentary and film/news segments mixed with intense electronic. The whirlwind and spaceship sounds, combined with air raid sirens is the stuff that nightmares are made of, yet it is brilliant. It takes “Revolution 9” one step further. It sets the stage, yet by the second track, it is a little more relaxed with the drone sounds in “Division”. This is followed by “Hobbs End”, which is a tip of the hat to the movie of the same name. The duo use sounds from the film very effectively. And, as with the rest of the album, creates its own distinct atmosphere.

You get the point, however, that although this is an electronic album it is not noise. And although they have their own sound, the tracks are different and the duo have created a fascinating album. Also, there is a lot going on with each song. This is noise, but it is not noise. It is organized, constructed to elicit emotions, thoughts, and feelings. When one listens to the album, the songs draw the listener in, so they can form their own images of the track in their own head. It is brilliant in this way.

That is the beauty of the work. Heretic is an album of eight soundtracks to films not yet created. In fact, some of the tracks are the sounds of a movie not yet filmed. Heretic is a very important and, like most of their music, groundbreaking. It is unlike anything you have heard and when one has an open mind and listens, they are rewarded with a beautiful, unearthly sound.

Born and raised in Whitby, Aaron discovered music through his love of The Beatles. This led to a career in radio, writing for various publications, and ultimately a radio show about The Beatles (Beatles Universe), which ran for over four years. When not immersed in music, Aaron enjoys spending time with the loves of his life -- his wife Andrea, and daughters Emily and Linda (all of whom have an intense love of music too).
RELATED ARTICLES
album reviewalbum reviewsheretic
9.0