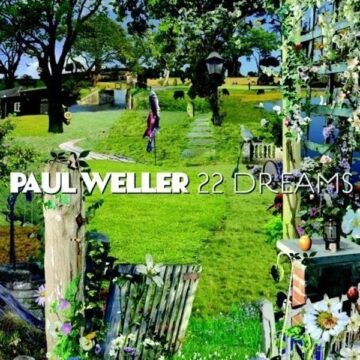 In June, 2008, Paul Weller released his ninth solo album, 22 Dreams. It was a massive album in the U.K. and Europe. In fact it made it to number one in the U.K., his third number one solo album in that country. It became an instant classic. Weller included guest appearances from Noel Gallagher and Gem Archer (from Oasis), Graham Coxon (Blur) and Steve Cradock (Ocean Colour Scene). But it isn’t the guests that made this album so special, it was the songs. Weller combines rock, jazz, pop, rhythm and blues and just about everything throughout the album.

This is a straight re-release on vinyl, with a poster and booklet. There are no bonus cuts and although that sounds odd for a re-release, it is a chance for fans to obtain this classic album on vinyl without paying huge amounts of money, as you would for the original vinyl released in 2008. The question becomes, does the album benefit from being on vinyl. As everyone has opinions on the sound of vinyl, I will say that the album does benefit from being on vinyl. Weller is from the era of records, not downloads and CDS, and although he has kept up with the times, his love and passion remains with those black, flat discs.

The album itself is a remarkable achievement for Weller. Curiously there are only 21 songs on the album. For the 22nd, I am afraid you may have to search out the Japanese CD with the bonus track of a live version of “Echoes Round The Sun”. But this is not an error on Weller’s part. I am sure he is leaving the 22nd as a dream for the listener.  But for the record, “Dream #22”, which is a story by Simon Armitage, is included in the booklet. Weller has always written very melodic and instantly accessible songs. This album is proof of that. The fact that it features three hit singles is testament to the high quality and much-loved songs found inside the package.

Weller also shows his gentler side with a few brilliant instrumentals, including a drone-like experimental song “Night Lights”, the beautiful “Lullaby Für Kinder”, and the equally interesting but more jazz-oriented “Song For Alice”. “Where’er Ye Go” is another stunning track, beautifully arranged and orchestrated as Weller sings, no doubt, to his children. It is quite emotional and has stood the test of time. And that is the same for the entire album. It has aged well and does not sound dated in the least.

Lyrically, like dreams, Weller goes into many areas of life, politics, aging, and everything in between. “God” even makes an appearance in the song “God”, which guest narrator Aziz Ibrahim as God, who takes exception to the person he is talking with who is accused of   “only calling when you need me“. This is powerful stuff and not the typical lyrical content of a rock album in 2008.

There is a lot to discover on 22 Dream, both musically and lyrically. It makes a welcome return and a chance for a new, refreshed listening experience. It is an opportunity to listen to the album if you missed it the first time around and it is a great chance to hear it on vinyl. The packaging is near perfect and I am glad to see it on the record store shelves.

Born and raised in Whitby, Aaron discovered music through his love of The Beatles. This led to a career in radio, writing for various publications, and ultimately a radio show about The Beatles (Beatles Universe), which ran for over four years. When not immersed in music, Aaron enjoys spending time with the loves of his life -- his wife Andrea, and daughters Emily and Linda (all of whom have an intense love of music too).
RELATED ARTICLES
album reviewalbum reviewsisland
9.0

by Aaron Badgley on July 22, 2022
Spore Heretic Hamfuggi Records Spore is a duo composed of Deborah Fialkiewicz and John Koser. Both are established artists in the world of electronic music and both have created some incredible art [...]
9.0