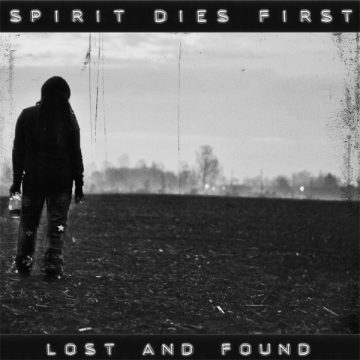 Meet the duo, Marina Verdi and Joey Weedmark,  that are Spirit Dies First,. After five years and a few singles, they have delivered their debut album, Lost And Found. Guitar and electronic-based rock, it is a very creative and heavy album. Not electronica, as such, but rather very heavy, dense, dark excursions into the human psyche. Lost And Found is full of songs written, played, and produced by the two. This is real D.I.Y, independent music.

The album kicks off with a drum, very quickly bringing in guitar. Soon, Verdi’s vocals join, and with that “Lost Again” introduces the album. “Got lost again, in the vast ocean”. It really sets the tone for the rest of the album and it also gives you an idea of where Spirit Dies First is going to take us. This is extremely well-arranged rock. And, as with the other songs on the album, very melodic.

Lyrically the songs are poetic and, for the most part, could be read as poems. It is not all doom and gloom, in fact, there is a great deal of hope throughout the album. “Elements” comes to mind, but sure, there are songs about the end of days and being alone. However, as the title says, the listener is “lost and found”. Not a concept album, in the traditional sense of the word, but there is a theme running through and a resolve at the end.

The instrumental, “Ancient Memories”, which features some fantastic guitar playing (loving the guitar treatment) and some interesting and effective ‘vocals’ . It fits nicely in the overall sound of the album and demonstrates Spirits Dies First’s ability to keep things interesting throughout the album

Lost and Found is a remarkable debut. They have used the last five years to craft and create a cohesive album. Even more impressive is that a number of their single, including the recent very effective cover of Nine Inch Nails’ “Terrible Lie”, are not on the album. I love that, as it is clear that they wanted Lost And Found to have a sound, and they succeeded. This is not a collection of singles, but a solid, cohesive album. An impressive debut by a very impressive band.

Born and raised in Whitby, Aaron discovered music through his love of The Beatles. This led to a career in radio, writing for various publications, and ultimately a radio show about The Beatles (Beatles Universe), which ran for over four years. When not immersed in music, Aaron enjoys spending time with the loves of his life -- his wife Andrea, and daughters Emily and Linda (all of whom have an intense love of music too).
RELATED ARTICLES
album reviewalbum reviewsjoey weedmark
8.0