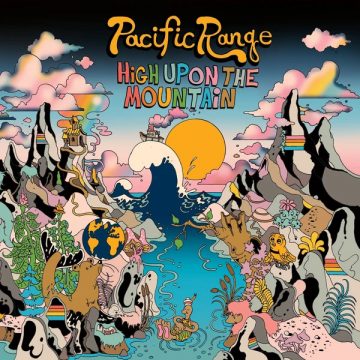 Thank goodness there are bands such as Pacific Range who are carrying on the tradition of the California/L.A. sound. They wear their influences on their sleeves, which is fine, because they take such influences and create their own distinct sound, adding a new chapter to the legacy. High Upon The Mountain is their second album, and their first for the new record label, Curation Records.

This is a straight ahead rock album, featuring strong melodies, tight instrumentation and musicianship, excellent production and personal lyrics. You can hear The Flying Burrito Brothers, Crosby, Stills, Nash and Young, The Grateful Dead, or even The Allman Brothers. There is even some very cool jamming and extended solos (check out the closing track, “Nothing Else More”, over seven minutes and every second is essential).

From beginning to end, this is a solid album that works on many levels. It is also an essential album for these times. Listen to  “Heartbeat Of Change”, you would almost think it was written in response to the global crisis, with lyrics such as “Things will be better farther on down the line/It’s true, it’s true”. Such optimism and hope is needed today. And set against a guitar driven backing, it is enough to bring a lump to the throat.

High Upon The Mountain is an impressive album. It is clear that all the live playing and their experience has brought the band to this level. The album flows nicely, and it plays as an album from the 1970s or earlier. There are obvious singles, but when the songs are placed on the album (sequencing of this album is stellar) it all comes together for a very strong, cohesive album.

Born and raised in Whitby, Aaron discovered music through his love of The Beatles. This led to a career in radio, writing for various publications, and ultimately a radio show about The Beatles (Beatles Universe), which ran for over four years. When not immersed in music, Aaron enjoys spending time with the loves of his life -- his wife Andrea, and daughters Emily and Linda (all of whom have an intense love of music too).
RELATED ARTICLES
album reviewalbum reviewscuration records
8.0