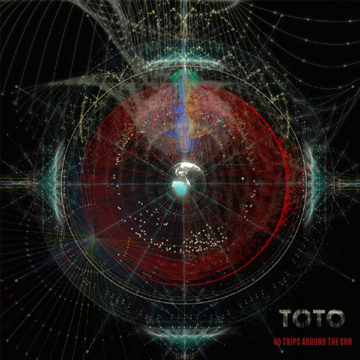 Toto was the Steely Dan of pop music. Top-notch session musicians who went the route of pop music when they formed a band. Very L.A. and very commercial and always very good. To celebrate their 40th anniversary, the classic and current lineup of the band has recorded three new songs to be included on their new Greatest Hits compilation, Greatest Hits: 40 Trips Around the Sun. This means: Steve Lukather (guitars and vocals and original member), David Paich (keyboards and vocals), Steve Porcaro (keyboards) and Joseph Williams (lead vocals).

The truth is, Toto has never broken up and continues to tour and record new albums. Their last album, Toto XIV, was released in 2015. But what this new compilation does do is bring together many of their career highlights while alerting older fans that this is still a viable band. It may be difficult getting fans to listen to a new album, but if you include three new songs with a ‘best of,’ you reach many more people.

This collection is not sequenced in chronological order, which I prefer as it gives one the chance to hear a band evolve over time (The Beatles 1 is a good example: “Love Me Do” to “The Long and Winding Road,” and you can hear the band grow over those eight years). You do get the hits from their debut album (1978’s Toto), such as “Hold The Line” (my favourite), “I’ll Supply The Love”, and “Georgy Porgy,” to their latest studio release. Their first album features Bobby Kimball on lead vocals. Their debut album proved to be a huge commercial and critical success, but from 1978 until 1982 the band saw declining record sales and declining interest.

It was somewhat of a shock when in 1982 Toto IV was released and became a Grammy-winning, smash success, both commercially and critically. “Africa,” “Rosanna” (both on this collection), and “Make Believe” (not included) played on radio and they were THE band of 1983-1983. Just try to get “Africa” out of your head now. Brilliant song. But after that album, Bobby Kimball left the band, and by 1986’s Fahrenheit, Joseph Williams took over vocal duty. Toto never achieved the same degree of success as Toto IV, but that does not mean later albums should be dismissed. Quite the contrary. “I’ll Be Over You” from Fahrenheit is included on this new collection and is an example of the high quality of music Toto made and continues to make.

They have a knack of blending jazz and pop with, at times, world music. This adds up to some intricate melodies, tight playing and overall great songs. Perhaps lyrics are not their strong point (mostly love songs, but we all know there is nothing wrong with silly love songs). Steve Lukather has provided many tasteful licks to many of Toto’s great songs over time, and continues with the three new songs.

The three new songs are quite a welcome addition to this album. “Spanish Sea” has a slight “Africa” vibe going on for it, and that is more than welcomed by me. It is a great song and should be a hit. The other new songs, “Alone” and “Struck By Lightning,” show a band still in their prime. A little experimentation with the pop format, some great playing, and strong vocals.

Toto has been around for 40 years and while their lineup has been somewhat fluid, their sound has not been. When you hear a Toto song, you know that it is Toto. No question. But this is not a criticism, nor does it mean everything they do sounds the same. Not at all. It means that this band managed to find a sound without developing it into a formula.

This is a wonderful collection of new and old, probably like one of their concerts.

Born and raised in Whitby, Aaron discovered music through his love of The Beatles. This led to a career in radio, writing for various publications, and ultimately a radio show about The Beatles (Beatles Universe), which ran for over four years. When not immersed in music, Aaron enjoys spending time with the loves of his life -- his wife Andrea, and daughters Emily and Linda (all of whom have an intense love of music too).
RELATED ARTICLES
africaalbum reviewsalone