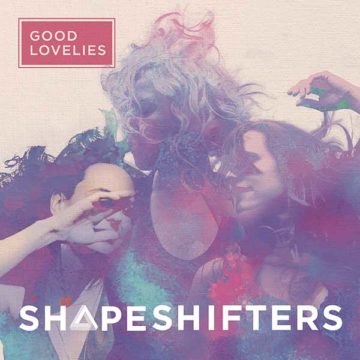 Kerri Ough, Caroline Brooks and Sue Passmore are the Good Lovelies. The group has been around since 2006 and issued their first EP in 2007 (Oh My!). Their first album was released in 2009 (Good Lovelies), and since then they have issued three more studio albums, a live album, and an EP. Shapeshifters is their fifth studio album, and their first since 2015’s Burn The Plan.

Upon listening to Shapeshifters, I can’t help but think that this is the album it has all been leading to. It demonstrates how the Good Lovelies have grown and it is, quite simply, brilliant. Their other albums are fantastic as well. They have a catalog of very strong folk/pop albums. But as each album progressed, they have been expanding the boundaries of their music. Shapeshifters is the next step for the Good Lovelies, but here they took a giant step.

Producer Daniel Ledwell (Justin Rutledge, Fortunate Ones) has given the band a different sound. While Les Cooper has done a wonderful job producing Good Lovelies’ last three albums, the band decided to go with a different producer, and the result is an expansion of their sound. The production, at times, is a bit slicker than previous albums, but it fits. Ledwell has not taken away anything Good Lovelies does well (for example, their immaculate three-part harmony), but what he’s done is placed their sound in different situations and different arrangements.

For Shapeshifters, the band has gone outside the band to write songs. The lead -off single “I See Gold,” for example, was co-written with Robyn Dell’Unto. The song has a great deal of power to it, and lyrically balances optimism with real-life struggles. It is a stunning song, executed perfectly by the band. The video is also well worth watching and one of the best music videos I have seen this decade.

Peter Katz co-wrote “Daylight,” which is another highlight from the album (the chorus of “When can I see you in the daylight is all that I am wanting of you” is simply heartbreaking). Former producer Les Cooper also contributes to the album as a co-writer.

Musically, the Good Lovelies get to show off their musicianship on Shapeshifters as well. Playing instruments not heard on a Good Lovelies album in the past and arranging the instruments in such a way to create intense atmosphere and the perfect backdrop to highlight the vocals and lyrics.

With Shapeshifters, the Good Lovelies have grown and evolved into a different kind of band. They will not lose old fans with this one; I don’t want to scare anyone off. The trademark sounds of the Good Lovelies are still there. Harmonies, melodies, and that touch of folk/roots music. But what has changed is their presentation. They have taken their genre and bent it a little to include more pop or rock sounds. And it works. Shapeshifters is a brilliant album and, in a sense, the beginning of a new chapter in the musical life of the Good Lovelies. I am glad they made a decision to spread their wings and experiment with their sound/style.

Born and raised in Whitby, Aaron discovered music through his love of The Beatles. This led to a career in radio, writing for various publications, and ultimately a radio show about The Beatles (Beatles Universe), which ran for over four years. When not immersed in music, Aaron enjoys spending time with the loves of his life -- his wife Andrea, and daughters Emily and Linda (all of whom have an intense love of music too).
RELATED ARTICLES
album reviewsburn the plancaroline brooks
8.0