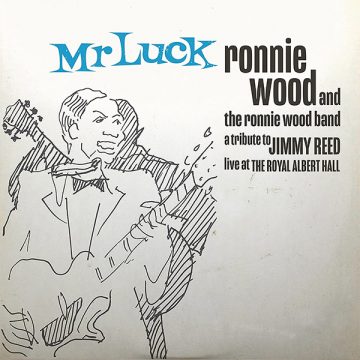 Returning with his most recent live album with a tribute album to a blues legend, Rolling Stones guitarist Ronnie Wood has released Mr. Luck – A Tribute To Jimmy Reed: Live At The Royal Albert Hall. Backed by The Ronnie Wood Band and former Stones guitarist Mick Taylor, the album was recorded live in 2013 and follows the 2019 release of Mad Lad: A Live Tribute To Chuck Berry. Over the course of 18 tracks, Wood and company successfully pay homage to the music and legacy of Reed in an exciting and faithful fashion.

With the band walking onstage to thunderous applause and a woman declaring her love for Wood, the band kicks the show off with the strutting blues of “Good Lover”. The guitars are crisp, filling the space with the warmth of classic tones in support of Wood’s gruff yet gentle bluesy rasp of a voice – think an older Stevie Ray Vaughan in tone. “Good Lover” demonstrates that The Ronnie Wood Band are as tight a blues ensemble as they come; however, this is only further developed on the following song, the slow burning, sauntering title track, “Mr. Luck”. This is a band that ebbs and flows together effortlessly and organically in the most subtle of ways, as if they’ve spent a lifetime shedding collectively on stages across the world. “Mr. Luck” is, simply put, a masterclass in blues performance.

Throughout the remaining 16 tracks, the band continues to shine on, with a number of moments stealing the spotlight. The first comes from the shuffling “Ain’t Loving You Baby”, followed by the instrumental Latin jam of “Roll And Rhumba”, which also features a thrilling drum solo section. Additionally, the start and stop pulse of “I Ain’t Got You” and the Bobby Womack feature on “Big Boss Man” also stand out. The chemistry between Wood and Taylor must also be applauded as it nearly rivals that of Wood or Taylor with Keith. With their guitars intertwining and weaving around each other, the two are in complete sync with one another, as heard best throughout “You Don’t Have To Go”, “I’m Going Upside Your Head” and the quintessential “Bright Lights, Big City”, also featuring Womack.

Performing a range of carefully curated tracks of Reed’s singles and deep cuts, Wood’s tribute establishes the importance, vitality, and timelessness of Reed and his work within the blues tradition. Wood’s performance, as a vocalist and guitarist is incredibly strong as he takes the centre stage, backed by an equally stellar ensemble. Furthermore, Wood and Taylor continue to demonstrate their capabilities as some of the most respected elder statesmen of the blues from their generation as Mr. Luck – A Tribute To Jimmy Reed: Live At The Royal Albert Hall proves to be as much of a fitting tribute to the music of Reed as it is a standout indulgence of pure, classic blues for Wood and the boys.

A passion for music has always been a part of Gerrod’s life. As a young boy, he was raised on a steady diet of the music from The Chili Peppers, Aerosmith, The Stones, Prince, and others from his mum. Raised in the GTA, Gerrod continued to foster his love for music by attending a wide range of concerts and learning the drums. His unapologetic passion for music has no bounds and has spread to a wide variety of styles, whether it be the 90’s rock that sound tracked his teenage years, the jazz he studied in university, or his newfound love for hip-hop. He recently received his bachelors in music and education from York University and is passionate about writing and reviewing good (and less than good) music. Gerrod is also the drummer and songwriter for a Toronto based rock & roll band, One In The Chamber.
RELATED ARTICLES
album reviewalbum reviewsbmg
8.0