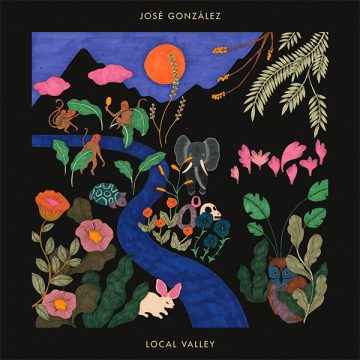 José González is back. Local Valley is the first new album by González in six years, following the 2015 release of Vestiges & Claws.

This album also marks the first album featuring songs in all three of his languages – English, Spanish, and Swedish. Rather than coming across as a gimmick, this adds a breadth to the album. Like a painter using all the available colours, González allows his music to flow through whichever language is best fit. This shows the power of his songs to communicate emotion through music alone.

The album is cohesive, albeit a little bit bland. The majority of songs feature González alone on guitar and vocals, fingerpicking melodies in unusual tunings. At its best, songs like “El Invento” envelop the listener in tender emotion. At its worst, songs like “Horizons” blend into the background and are immediately forgettable. The album also includes a solo version of “Line of Fire,” which González released in 2013 as part of Junip. Its inclusion on the album is nice, but unnecessary, as it feels more restrained and does not add anything new to the track.

“Head On” is the first song with a sense of momentum, with González rallying against “corrupt oligarchs” and “nepotism” over top of handclaps and ringing guitar strums. González has become increasingly passionate about big socio-political topics, referencing topics like effective altruism, secular humanism, and eco-modernism in his Twitter bio.

While these views may inform his music, they feel a little awkward when explicitly referenced in the songs. The lyrical meter of “Visions” feels stilted at times, as if González is forcing the words to fit the rhythm of the music. It is not easy to deliver lines like “We are patiently inching our way / Toward unreachable utopias” without sounding a little bit forced.

By contrast, “Swing” sees González prioritizing rhythm to the detriment of the lyrics. While the gently pulsing, reggaeton-esque beat adds a much-needed sense of movement to the track, the lyrics come across as silly. When juxtaposed with the more political songs on the album, it is hard to accept the repeated refrain of “Swing, swing, swing your belly, baby / Move, move, move your body, buddy” without raising an eyebrow skeptically.

Despite some lyrical hiccups and a lack of musical diversity, this is a welcome return for González. The whole album has a clear, crisp sound and the sparse arrangements benefit his crooning voice. “El Invento” and “En Stund På Jorden” are gorgeous songs, full of earnest longing. “Lilla G” is one of the most musically interesting tracks on the album. González utilizes his voice as another instrument, experimenting with overlapping vocal harmonies.

As a whole, it is a pleasant album, blending gently into the background of González’s musical repertoire.

Kieran Davey is a freelance writer and music enthusiast from Vancouver, Canada. He particularly enjoys alternative rock, groovy hip-hop, and basically any music from the 60's. Aside from reviewing music, he also loves playing guitar and spending time in nature.
RELATED ARTICLES
album reviewalbum reviewsjosé gonzález
8.0