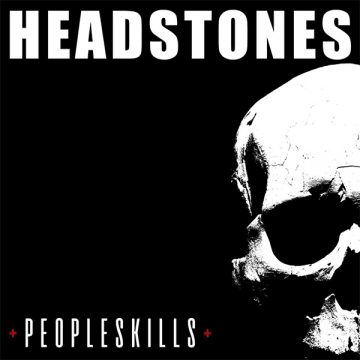 PEOPLESKILLS opens with the crunching rocker “Leave It All Behind”. While the high energy track sets the tone for the rest of the record, it, along with the next few songs, feel done before by the band. “Dimes And Pennies” has a ripping riff and “Damned” packs a punch reminiscent of The Ramones, but I felt the album truly picked up steam with the folky ballad, “Motorcade”. The song comes out of nowhere and is driven by a dark, almost cinematic vibe that propels the song forward.

As the album continues, Headstones seem to pick up from where they left off on Little Army with a far more innovative sound and a raw, aggressive energy. Between the near flamenco interlude and the heavy breakdown at the end, “Caught In A Loop” stands as one of the most impressive examples of this on the album. The same could also be said about the western inspired, “Dark Side Of The Doom”. Furthermore, “Part Of Me”, “By Sunday”, and “That’s What I Get” bring the album to a strong conclusion.

All in all, PEOPLESKILLS stands as yet another strong entry into Headstones’ discography as they continue to push forward since reforming in 2011. The record is both nostalgic and refreshing as Headstones continue to develop their unique take on punk rock; one that ultimately pays homage to the founders and icons of the genre, while remaining distinctly that of the band.

A passion for music has always been a part of Gerrod’s life. As a young boy, he was raised on a steady diet of the music from The Chili Peppers, Aerosmith, The Stones, Prince, and others from his mum. Raised in the GTA, Gerrod continued to foster his love for music by attending a wide range of concerts and learning the drums. His unapologetic passion for music has no bounds and has spread to a wide variety of styles, whether it be the 90’s rock that sound tracked his teenage years, the jazz he studied in university, or his newfound love for hip-hop. He recently received his bachelors in music and education from York University and is passionate about writing and reviewing good (and less than good) music. Gerrod is also the drummer and songwriter for a Toronto based rock & roll band, One In The Chamber.
RELATED ARTICLES
album reviewalbum reviewscadence recordings
8.0