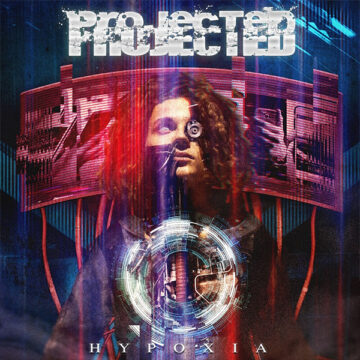 New York rock and metal band Projected has been called a supergroup not just because of members John Connolly (Sevendust), Eric Friedman (Tremonti), Vinnie Hornsby (Sevendust), and Scott Phillips (Alter Bridge) that hold them together, but because of the vast stretch of talents each artist possesses and brings to the table for every release.

Solidifying their charged-up, ethereal, rock/metal sound with the 2012 release Human, their original full-bodied soundscapes would continue to their 2017 release, Ignite my Insanity. The band is now on their third release, Hypoxia, on June 24, via Rat Pack Records, and their atmospheric and emotionally-challenging lyricism is in top form.

Hypoxia begins with their immersive instrumental cinematic moment, “Consequences.” with echoing guitar tones and emotionally piercing piano keys, it’s a beautiful gateway to a second brutal experience, “Dead Weight.” Technically gorgeous and full of abrasive energies throughout, this track opens up the floors for other defining junctures that will follow.

Single “Stain” is another delicate track that is worth mentioning, not only because it showcases all the musicians in their purest form, but as a true musician, we see Sevendust’s John Connolly shine instrumentally and vocally.

Another gem on the album that takes center stage throughout the album is “Take Aim.” With powerful lead-guitar brilliance, it prepares us for a unique moment and single “Hypoxia.” Layering sounds of fiery guitar riffs contrasted with abrupt percussive cadence, “Hypoxia” is one of the best experiences on the album.

Another progressive point on Hypoxia that proves to be impressive are its last few experiences, “Test” and “Dark.” Proving the supergroup is more than capable of blending heavier and softer elements to drive home a more poignant and sentimental message, Projected remains successful at keeping listeners engaged with their effortless sways of distinctive tones throughout the record.

Hypoxia concludes with an emphatic finale, “At The Window.” With crunching guitar riffs and a rich texture of gorgeous vocals and technical percussive work, Hypoxia ends on a brilliantly massive multi-faceted experience.

Hypoxia proves that John Connolly, Eric Friedman, Vinnie Hornsby, and Scott Phillips, are all talented musicians in their own right. Delivering some of their most massive dissonant material to date, Projected has artfully developed an emotionally resonant album worthy of praise.