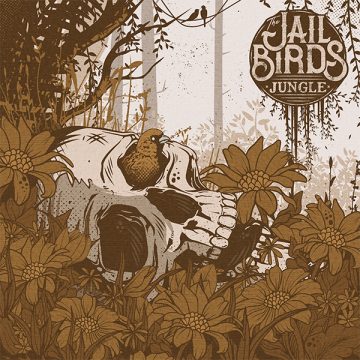 One of Ontario’s hottest rock bands, The Jailbirds, has returned with its sophomore EP. Jungle is the long-awaited release following their 2019 debut, The Black River. Since then, the band has released a number of singles over the past year, including “Watery Grave”, “Dull My Brain”, and “I Will Move On”, all of which appear on the new five-track release which only serves to justify the excitement surrounding the band.

Jungle kicks into high gear with the swampy, high octane shuffle of “Dull My Brain”. Immediately, the listener is hit by a wave of crunchy, curated guitar tones and the force of a band that sounds far bigger than the trio that they are. If ‘80s Aerosmith – with the big choruses, gratuitous backing vocals, the glossy production, and the Joe Perry-inspired solo – were fronted by Myles Kennedy, you’d have “Dull My Brain”. This is followed by the contrasting title track, “Jungle”. The song pulls from the ‘90s with a grungy tone and a sludgy riff that twists and turns through juxtaposing ambient sections that add a level of modernity and atmosphere of Seattle circa ’92 – here’s looking at you, Dirt.

The album continues with the second and final unreleased track. “All I Need”. The track is a riff heavy, ‘70s hard rock banger with a catchy chorus backed by ripping guitars. The initial “Watery Grave” follows as a hard-hitting and bluesy rocker. With the half-time verse, the crunching riff, and lush vocal harmonies, “Watery Grave” is the definitive highlight of Jungle. Bringing the EP to a conclusion is the climatic recent single, “I Will Move On”. The song continues to play with contrasting textures, similar to “Jungle” which creates a haunting energy that drifts between the softer verses and the heavy choruses and makes for a strong ending to a great record.

The Jailbirds return with a follow-up worthy to the initial excitement and success of The Black River. A little less dark and aggressive, Jungle shines for its songwriting that remains equally retro and inspired as it does fresh and modern among the growing underground wave of rock bands. The performance from the entire band is tight and powerful, with vocalist and guitarist Myke Penny taking centre stage for his incredible guitar work and unique vocals. As a whole, Jungle can stand among the strongest rock releases this year as The Jailbirds pump a much-needed level of polished danger and grit into the genre as one of Canada’s most exciting up-and-coming bands.

A passion for music has always been a part of Gerrod’s life. As a young boy, he was raised on a steady diet of the music from The Chili Peppers, Aerosmith, The Stones, Prince, and others from his mum. Raised in the GTA, Gerrod continued to foster his love for music by attending a wide range of concerts and learning the drums. His unapologetic passion for music has no bounds and has spread to a wide variety of styles, whether it be the 90’s rock that sound tracked his teenage years, the jazz he studied in university, or his newfound love for hip-hop. He recently received his bachelors in music and education from York University and is passionate about writing and reviewing good (and less than good) music. Gerrod is also the drummer and songwriter for a Toronto based rock & roll band, One In The Chamber.
RELATED ARTICLES
album reviewalbum reviewsdull my brain
8.0