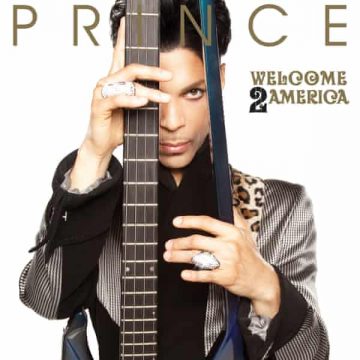 The posthumous additions to the expansive discography of Prince have included a pair of massive deluxe reissues and numerous vinyl debuts, while the two unreleased collections of music – 2018’s Piano & A Microphone 1983 and 2019’s Originals – were still not entirely new music as the former was a selection of tour rehearsals and the latter was a series of originals that Prince wrote for other artists. With this in mind, Welcome 2 America stands in an exciting and unique position as the first true studio album from Prince since his passing in 2016. Recorded in 2010, the album includes the recent single, “Born 2 Die”, and it is a wonder why the album was never released in the first place.

Prince opens the album with the title track, a moody and atmospheric jazz fusion and gospel inspired track that stirs up a level of suspense and stands as a proactive stance against social and cultural failures of America in the last decade – failures which, for the most part, have only festered and grown since. Prince’s spoken word over a slow burning and spontaneous instrumental section and a gospel vocal refrain takes aim at a floundering education system, our overreliance on technology, the growing divide between economic classes, racial inequities, slavery, and obsessive celebrity culture, all within Obama’s presidency. It’s simple, but it’s powerful. While Prince has often kept politics out of his music,  “Welcome 2 America” seems to be only a musical and thematic prelude for what is to come. “Running Game (Son Of A Slave Master)” follows the strong opener with a musical odyssey that develops and moves in such an unexpected manner.

At the heart of Welcome 2 America is funk and soul music from the ‘70s and ‘80s. The lead single, “Born 2 Die”, was written in response to Cornel West’s criticism, saying Prince was “no Curtis Mayfield”. As a result, the single and album as a whole feel as though they were pulled out of the ‘70s as it struts and grooves with such an effortless and organic ebb. Even when Prince digs into rock, jazz, and gospel, there is an old school soul feel to it. There isn’t a weak track among the twelve new songs, but the restless shuffle of “Same Page, Different Book the acid-funk of “Check The Record”, the gospel charged Soul Asylum cover “Stand Up And B Strong”, the stirring R&B ballad “When She Comes”, and the rocking “1010 (Rin Tin Tin)” are definite highlights.

Had Welcome 2 America been released when it was recorded, it likely would have served as a follow-up to 2010’s 20Ten. Curiously, Welcome 2 America is a far more cohesive and stronger album than much of what Prince was releasing in the late 2000’s. It’s odd that we are only hearing this album now; however, it stands as a latter career highlight for Prince. There are elements that feel like a far more refined extension of what Prince was doing throughout the 2000s while other elements harken back to some of his greatest creative peaks, with tracks feeling nostalgic for 1987’s Sign O’ The Times. Furthermore, there are tones and vibes throughout the album that echo the pop music of the 2010s and even the visionary and experimental hip-hop that was still to come from the decade. Welcome 2 America is a snapshot of the creative crossroads Prince found himself at during the dawn of a new decade. It suggests a soul reprisal for Prince unlike before; and indulgence before his rock collaboration with 3rdeyegirl in 2014 and his ultra-pop solo release that same year, yet it feels like a precursor to his final two albums, HITnRUN Phase One and HITnRUN Phase Two, both released in 2015. Welcome 2 America gives the final creative arc of Prince a more concrete foundation, one which flourishes as a stellar musical experience that could only come from Prince.

A passion for music has always been a part of Gerrod’s life. As a young boy, he was raised on a steady diet of the music from The Chili Peppers, Aerosmith, The Stones, Prince, and others from his mum. Raised in the GTA, Gerrod continued to foster his love for music by attending a wide range of concerts and learning the drums. His unapologetic passion for music has no bounds and has spread to a wide variety of styles, whether it be the 90’s rock that sound tracked his teenage years, the jazz he studied in university, or his newfound love for hip-hop. He recently received his bachelors in music and education from York University and is passionate about writing and reviewing good (and less than good) music. Gerrod is also the drummer and songwriter for a Toronto based rock & roll band, One In The Chamber.
RELATED ARTICLES
album reviewalbum reviewsprince
9.0