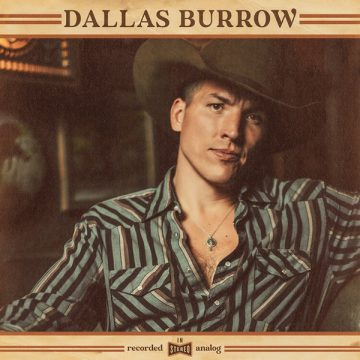 For some, the cowboy hat Dallas Burrow is wearing on his second, self-titled album might be the only reason to skip on it. For others, it might be exactly the reason to pick it up.

In both cases, they might do it for exactly the wrong reasons. Sure, Burrow plays country music, or to be more precise, country-tinged music, or Americana if you wish. Yet, the hat Burrow is wearing has very little to do with the standard Nashville country pop fare many would associate it with.

You see, Burrow is a Texas man (if “Born Down In Texas” here is not the giveaway), and with that comes a completely different outlook on country and country music in general. Yes, you can immediately make the connection with another Texas legend, Townes Van Zandt. Like Van Zandt, Burrow is a storyteller par excellence which he expresses through quite a diversified musical set that covers a much wider array of possibilities. At the same time, he stays in tune with all things roots, from folk to soul.

Being just a good storyteller wouldn’t work if Burrow wasn’t also an excellent songwriter with a voice that goes along with those qualities. All that is coupled with a little help from Bruce Robinson, another Texas music legend and some impeccable musicianship. Which all makes you either to forget about that hat, or just embrace it as is, your pick.

Formerly a lot of things, including a journalist and a translator, currently a freelance writer living in The Netherlands.
RELATED ARTICLES
album reviewalbum reviewsamerican dream
8.0