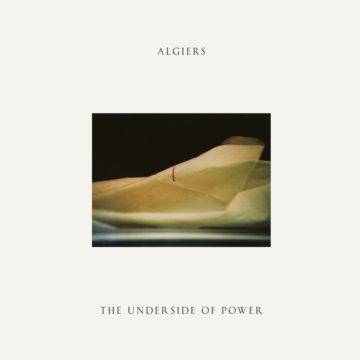 This album is not for the faint of heart. I think the opening lines from the first track, “Walk Like A Panther” sets the tone. ‘We won’t be lead to slaughter, This is self genocide. It’s The hand of the people that’s getting tenser now, And when we rise up…’  This set against some of the hardest music I have heard all year.  The song also features a sample of slain Black Panther member, Fred Hampton.  With this, you know you are not in for a comfortable ride with this album.

Algiers is based out of Atlanta, Georgia, and The Underside of Power is their second album (their debut album, Algiers, was released in 2015). From their inception, Algiers has produced angry, thought provoking experimental hard music with lyrics to match. This is not anger for anger’s sake. They are extremely political and well informed. Their ideas and observations are not just flavour of the month. These guys live this stuff.

The band is now a four piece, with the addition of Matt Tong (formerly of Bloc Party) on drums. He brings with him the heavy rhythm sounds backing the stylized music. Franklin James Fisher sings with extreme conviction but also adds to the mix with his multi instruments (Piano, percussion) amongst them  throughout the songs.  Ryan Mahan plays bass, piano and synthesizer (his synth work is stunning, especially in “A Murmur, A SIgn”).  Rounding out the band is Lee Tesche who plays guitar, percussion, backing vocals and more

The album was recorded mainly in Bristol, and was produced by Portishead’s Adrian Utley, who brings a great deal to the sound of the record, the layered textures, the sounds and the overall feel.  Brilliant production, and according to the press release, he loaned some of his synthesizers to the band (he has a huge collection). Guests on the album include Ben Greenberg (The Men, Uniform) and Randall Dunn (Sunn O))) )

Much like My Chemical Romance’s The Black Parade, The Underside of Power is a concept album about anger and where it should be directed.  Not at each other, but at those with the power. They don’t focus solely on America, but include Brexit as well. They address racism and xenophobia on a worldwide scale, but do focus on Trump’s America. Something tells me that if these guys are not blocked from his Twitter account, they soon will be.

Although the music is hard, that does not mean it does not have some variety. A number of the songs rely on loops, programmed keyboards, and some songs, like the title track are downright catchy.

This is a well played, recorded and structured album. It may not be for all tastes, and it is an album that demands the listener to pay attention. If one does, there is a huge reward. I have listened several times, and each time I hear something different and I gain a new appreciation for the album. It is well worth the time and energy.

Born and raised in Whitby, Aaron discovered music through his love of The Beatles. This led to a career in radio, writing for various publications, and ultimately a radio show about The Beatles (Beatles Universe), which ran for over four years. When not immersed in music, Aaron enjoys spending time with the loves of his life -- his wife Andrea, and daughters Emily and Linda (all of whom have an intense love of music too).
RELATED ARTICLES
album reviewsalgiersmatador records
8.0