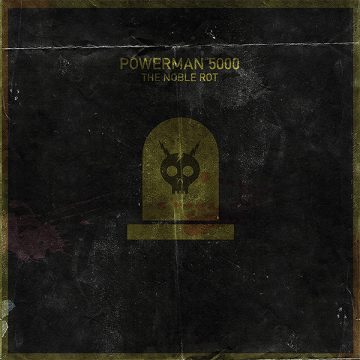 Powerman 5000’s 10th album takes you on a musical journey filled with retro and electronica tones throughout. A perfect example of this is lead single “Black Lipstick.” It has a strong Billy Idol vibe, especially with lead singer Spider One’s brooding vocals. The video is an entertaining parody of an ‘80s late night music television show featuring a fictitious female goth band.

There is no shortage of catchy choruses and sci-fi themed lyrics that Powerman 5000 are known for. “Cannibal Killers That Kill Everyone”, a title that may raise an eyebrow to those not familiar with the band, but is no surprise to loyal fans, kicks off the album with great vigor.

Gears are then shifted into a hip hop style lyric delivery in “Brave New World”.  You also get a cover of “We’ve Got the Beat” and a new 2020 recording of the band’s signature hit “When Worlds Collide!”, a song that, even 20 years later, still contains plenty of oomph.

Different genres of music are well-blended together into a cohesive, fun album. For a band that’s been around for approximately 30 years, they’ve proven to never grow stale in their musical endeavors.

This album may not appeal to the average Powerman 5000 fan who’s mostly familiar with their music of the late-‘90s. To the devoted fans and new listeners, the album is a wonderful, musically diverse experience from beginning to end.

Trista’s a music addict who’s taste in music spans over numerous genres. She enjoys playing her bass guitar, but honestly she’s not very good at it. So she goes to concerts and watches real musicians who are far more talented than her. You’ll find her there in the front row, because, well, she’s short and wouldn’t be able to see the stage very well otherwise, and because she strives to get the perfect photo to capture the experience.
RELATED ARTICLES
album reviewalbum reviews
8.0