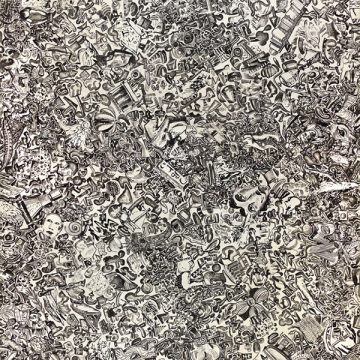 STRFKR’s Ambient 1 is an album unlike any of their other releases. Released just months after their most recent Future Past Life, it is definitely something very different. There are no vocals, no traditional song structures, almost nothing resembling the addictive pop the band is known for, but deep listening reveals a more deconstructed manifestation of STRFKR’s meticulously crafted sound.

The inspirations for Ambient 1 were as vague as the album itself. Upon completing work on the lo-fi dreaminess of Future Past Life, STRFKR’s principal songwriter Josh Hodges found himself returning repeatedly to albums by his favourite ambient artists and minimal composers. This happened in correlation with stumbling into a wealth of new age cassettes at an estate sale and a time in Joshua Tree National Park spent excitedly experimenting with a friend’s vintage Prophet 5 synthesizer. This growing obsession with synthesis and the culture around it also concurred with the daily darkness of the times and some personal disruptions. Hodges began recording ambient experiments almost daily as a way of processing these difficult emotions. The music flowed intuitively, and arrived almost fully-formed. Slow motion glacial drones melt into trance-inducing rhythmic patterns on “Concentrate” and throughout the album hardware synth tones bounce across the stereo field, gelling together for a listening experience that’s meditative and enveloping.

Synth instrumentals fill your ears with ambient warmth. It’s not quite sad, not quite happy, but a hopeful gloom. A notable example is “Work Smoothly Lifetime Peace and Bunji”, which blurs the line between the mundane and the melancholy, almost reminiscent of Mort Garson’s Plantasia, with its dreamy twangs and drones.

The calm chaos in “Anxiety” is just as the title describes. The alternating pulsing through each speaker makes it hard to focus and pinpoint exactly where the sound is coming from at that exact moment. Its slow, drawn-out notes are gut-wrenching, hanging on by a thread as they cascade through the piece. The uncertainty reflects the unsettled feeling that many people experience very accurately.

Ambient 1 is a whimsical, dreamlike journey through the ups and downs of life where listeners travel through uncharted land with unique sights and sounds. It’s contemplative music that isn’t too heavy or too desolate, but instead, asks you to open your eyes to another world that just might be in front of us.

After borrowing her parents’ 35mm Yashica film camera and never returning it, Kristen discovered her love for photographing artists, particularly live performances. She spends her free time playing with her golden retriever and buying too many plants that she doesn’t have room for.
RELATED ARTICLES
album reviewalbum reviewspolyvinyl
8.0