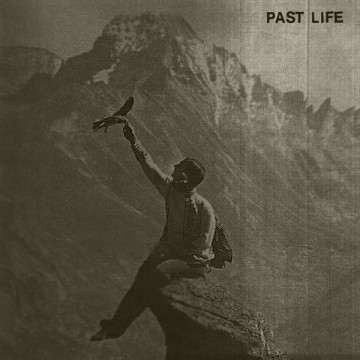 One of Broken Circles’ newest additions, Past Life, has released its first EP, aptly titled EP 1. Hailing from Brooklyn N.Y., these guys take the listener through a musical time machine back to the days of garage bands and jam sessions with a clear grunge/alt rock styling and an unusually inspiring album cover.

The album starts with an instrumental “Ojai I.” It briskly fades in with a few distorted chords, followed by a mournful guitar that immediately grabs your attention and sets a tone for what is about to come. They break the vocal silence with the next track “Sever Your Love,” a fuzzy formulaic in-your-face rock ballad that leaves you bobbing your head. Following that, “Split The Ground” begins. The first half of the EP gives a classic Social Distortion in their early days kind of vibe, keeping songs rough and straightforward. The vocals almost seem to fight for dominance with the guitar’s buzz, which takes the listener away from the (albeit fairly simple) lyrical content they are attempting to put forward.

Midway through the album is “Hate Bloomer,” and an homage to Nirvana’s “About a Girl” is tangible by the rhythmic cadence and timing combined with the raw live sound and vocal range. By “Losing Every Word” you get a clear feeling for the band’s tonal resonance. These short sweet anthems have a consistency similar to an experienced garage band’s sound (take that how you will). Musically there is not much range and depth as the songs come off a little flat apart from a few fuzzy amps and wailing guitars. I see myself in a grungy dive bar sipping a cheap beer, nodding my head along to the generic groove but not getting off my bar stool.

“Jack Knife” is easily the best song on the album and could surely be an isolated single. The hypnotically modulated sound of the vocals mix with the guitar that leads to a chorus that you can’t help but fall into and sing along. However, after a slow build to get to this upbeat energetic track the EP finishes up with “Ojai II,” which was disappointing because it disrupts the otherwise steady flow of the album. Standing on its own, it’s a lovely little more-slowly-paced acoustic ballad that educes chronic swaying which may tie the end and beginning of the EP together in a neat little bow, but at the cost of an awkward drop-off before. If the album were a line graph it would not be all that exciting to look at that one final heartbeat.

Overall, Past Life’s first EP is a consistent grungy throwback but lacked the explosive pop I’ve come to expect in my rock ‘n’ roll arsenal. On the brighter side, it did bring me down a nostalgic memory lane, reminding me of an angsty garage band turning it to 11 and just waiting to be heard, whether you like it or not.