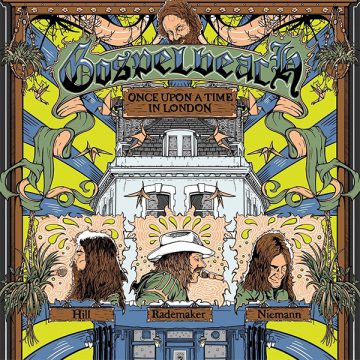 GospelbeacH
Once Upon A Time In London
Curation Records

Live albums are a tricky thing, you want to have the record sound good, while capturing the energy of the band and the crowd. GospelbeacH has successfully struck that balance with Once Upon A Time In London. Recorded on March 1, 2020 at The Betsy Trotwood in London during their very successful European tour in support of their last studio album, Let It Burn (2019). Once Upon A Time In London is a fantastic live album from beginning to end.

The tour, and certainly this show, paid tribute to the brilliant Neal Casal, who had rejoined the band for Let It Burn, but left the world just prior to its release. His loss was significant to the music world, but especially to GospelbeacH. Here, Brent Rademaker pays tribute with Casal’s “Freeway To The Canyon”. This is a tribute to a brilliant artist, a group member, and a dear friend. The performance of this song, as well as the vocals, does bring a lump to the throat. You don’t so much hear the emotion, but rather feel it.

This live show favours Let It Burn, and the songs translate remarkably well live. The album itself sounded like the perfect concert album, and this live one certainly proves that.  It opens, however, with “Strange Days” from 2017’s Another Summer Of Love. Then we are into Let it Burn. “(Baby) It’s All Your Fault”, “Bad Habits”, “Dark Angel” and “I’m So High” all sound vibrant live. It is also nice that they revisit their first album, Pacific Surf Line, for the perfect closing song “Mick Jones”. Overall, there is also a warmth to the performances. With some of the chatter left on the record, a very intimate feeling is created.

The rest of the album continues in this manner. It is a strong live album. The band is tight and the vocals are strong. It is a live album, not one that is doctored in the studio, but an excellent recording of a live show. Also of note the album cover, with a lovely tip of the hat to Richard and Linda Thompson’s I Want To See The Bright Lights Tonight.

This marks the first release on Curation Records, a label that Brent Rademaker helped to create and co-owns. It is exciting to see GospelbeacH’s music on this label. I am sure there are many more excellent releases to come. As for this album, having never seen GospelbeacH perform live, Once Upon A Time In London is an excellent substitute.

Born and raised in Whitby, Aaron discovered music through his love of The Beatles. This led to a career in radio, writing for various publications, and ultimately a radio show about The Beatles (Beatles Universe), which ran for over four years. When not immersed in music, Aaron enjoys spending time with the loves of his life -- his wife Andrea, and daughters Emily and Linda (all of whom have an intense love of music too).
RELATED ARTICLES
album reviewalbum reviewscuration records
8.0