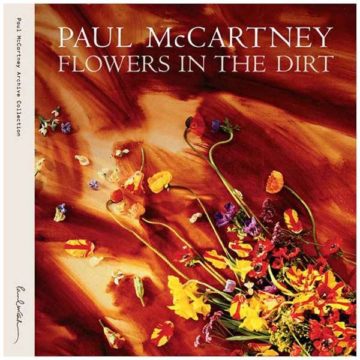 In 2010, Paul McCartney began a reissue series, called The Archive Collection, where he would reissue an album from his catalogue. The reissues would not only include the remastered album,  but also bonus cuts, and a DVD.  Here we are seven years in, and his latest project in The Archive Collection is Flowers In The Dirt, originally released in 1989.  As with the other issues, this one is available in a variety of formats, double CD, a deluxe edition with three CDs and a DVD, a double album vinyl set, and downloads.

Flowers In The Dirt is often regarded as McCartney’s comeback album.  I disagree with this assessment.  During the ‘80’s, McCartney wrote and produced some of his best work (Tug Of War, 1982), and some of his most experimental (McCartney II and the overlooked Press To Play), and over time his ‘80’s output have been re-evaluated.  McCartney II, for example, was initially dismissed by the critics. Today it is, quite rightly, regarded as a classic album and years ahead of its time.

Flowers In The Dirt was critically acclaimed at the time, mostly due to the contributions of, and co-writing with, Elvis Costello, who went under his actual name, Declan MacManus in the original issue of the album.  It was for this album that McCartney toured for the first time since the 1975/1976 Wings World Tour.  That tour was a huge success, and would result in a film, Get Back, and a very successful live album, Tripping The Live Fantastic.  The album topped the charts in the UK, Europe, and Japan, but sadly it was not the huge success he had hoped for in the U.S. and Canada.  The reason?  It did not get any air time, by 1989 McCartney did not fit on radio, and the music did not receive the attention it deserved.  This is a brilliant album, and deserved to be played.

The album is full of some of McCartney’s strongest songs he has ever written.  “Put It There” is an honest and moving song from a father to his son.  It sprang out of a comment Paul’s dad once said to him — “Put it there, if it weighs a ton, that’s what a father said to his young son”.  He crosses multiple generations in one line.  In this particular song it is just McCartney and his guitar, his foot tapping and his knees.  Watch the accompanying documentary; it is worth seeing for that alone.

In addition to “Put It There”, “This One”, “Distractions”, and the brilliant “Figure of Eight” plus the four songs with Costello, spell out a near perfect album.  The title of the album, Flowers In The Dirt, actually comes from a song he co-wrote with Costello, “That Day is Done”.  “She sprinkles flowers in the dirt, that’s when a thrill becomes a hurt.” — again sheer beauty about loss.  Quite a bit was made of his collaboration with Costello at the time, comparing Costello to Lennon.

Of course, he is no Lennon, but he did bring the best out in McCartney, and thankfully got McCartney to return to his treasured Hofner bass, which he still uses.  Whether love songs or not, these songs are some of McCartney’s most honest.

McCartney is accompanied by some very skilled players on this album:  Linda McCartney on vocals and keyboards, Paul ‘Wix’ Wickens on keyboards, David Gilmour, Robbie McIntosh, Stuart Hamish and many more. Wickens continues to play with McCartney today, making him the longest standing musician to work with McCartney.  He also worked with producers.  All of these elements added up to create a near perfect album.

The new reissue is fine.  The remastered sound is perfect, especially on vinyl, and the bonus material is interesting.  Sadly, with the deluxe edition, one may download a fourth disc of B-sides and remixes, which should have just been included in the set.

The album holds up and does not sound the least bit dated, with the exception of McCartney’s ‘house’ song “Où Est Le Soleil”, which although dated, still sounds fun.

As with all reissues, great care was taken, and for fans this is a must have.  People who are interested would do well to buy the double CD and see what they may have missed the first time around.  The only problem with this reissue is that it is not complete.  Given that the bonus CDs are under 40 minutes each, there was room enough to include all of the music released during this time.  There are a number of songs that McCartney issued on twelve inch or CD singles, or even special editions of Flowers In The Dirt, that should have been collected.  This few mixes and songs  may be a small thing, but they should have all been included.

Born and raised in Whitby, Aaron discovered music through his love of The Beatles. This led to a career in radio, writing for various publications, and ultimately a radio show about The Beatles (Beatles Universe), which ran for over four years. When not immersed in music, Aaron enjoys spending time with the loves of his life -- his wife Andrea, and daughters Emily and Linda (all of whom have an intense love of music too).
RELATED ARTICLES
album reviewspaul mccartneythe beatles
10