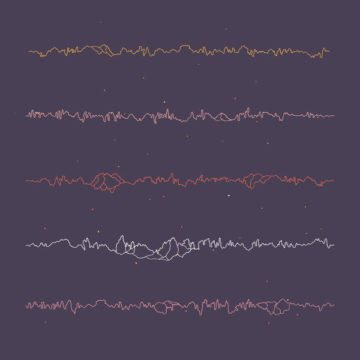 I am very well aware that the genre of “psych/experimental/kraut/noise rock” was always going to be a tricky one to review, but even with that awareness at the front of my mind, I am still almost totally unable to say anything good about Oneida’s fourteenth album release, 2018’s Romance, which is also their first in six years. How’s that for a preamble? Admittedly, there is potentially an element of musical unpreparedness at work here in that I may not be fully prepared to process music that is made with such a clear lack of linearity or focused direction, but even if that is the case, I still think I’d struggle here…

At its best, this is an album that experiments with creating feelings of chaos, disorder, and de-stabilization and if that is its artistic intent, then it has to be measured as having achieved its goal. There seems to be a solid base of life experience behind the band conveying their own breed of chaos and instability as they were forced in 2011 to relocate after their recording and performance space, The Ocropolis, was demolished as part of the ongoing gentrification of NYC.  Unfortunately, there is more to the quality or enjoyment of an album than artistic intent, and the complete lack of vocal quality (think James Murphy were he to give up on the concepts of melody and tonality entirely), almost complete lack of recognizable melody, and monotonous repetition wear the listener down to the point of both frustration and disconnection with the music.

If there is a strength to this album, it is the percussion of Kid Millions (another aspect of the band that is hard to stomach is the use of monikers that are clearly meant to be preposterous, but that may be pretentious of me to say), especially his work on “Lay of the Land”,  “Reputation”, and “Good Cheer”. Though the rest of the songs may swirl and devolve around him, his constantly up-tempo and poly-rhythmic presence is a standout.

I have just realized now that the best way to potentially explore this band in conventional terms is through comparison – if Tool, NIN, and a NYC underground punk band were to make a bad album together, it may sound like this. Except even that trio wouldn’t end their album with 18 minutes of sonic oddity. There will likely be listeners and review readers who will disagree with this assessment, but try as I might to look for positives, the words I have written are as generous as they come. The potential to explore some very interesting topics in very interesting ways exists here, but there has to be enough of the recognizable present in order to make the experiment connect.

Br. lives in southern Ontario, grew up on The Beatles and The Journeymen, spent his adolescence immersed in grunge, and his adulthood in British alternative. His greatest joy is seeing his son dance and grow into his own appreciation of the indescribable joy of music...
RELATED ARTICLES
album reviewsjoyful noise recordings
8.0