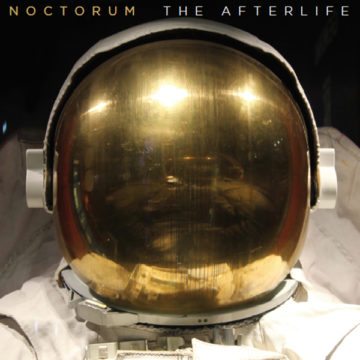 Noctorum has been missed since 2011’s Honey Mink Forever, and The Afterlife is a welcome return for the psychedelic pop/rock band; amidst all the strange developments in current events, the world needs albums like these. Marty Willson-Piper (lead vocals, guitar, bass, and Swedish cittra) and Dare Mason (keyboards, backing vocals) manage to make everything a bit more tolerable with their incredible melodies, thoughtful lyrics, and nearly perfect production.

Noctorum is named after a village near the members’ childhood homes on the Wirral in Northern England, not far from Liverpool. This is important because musically and lyrically, the album is devoted to reflection. Not in the obvious way—this is not Noctorum’s “Fern Hill”—but the band spends a lot of time examining the past, both personal and historical, through the music.

Though not a concept album, The Afterlife functions as a cohesive whole and should be consumed in one sitting. The album might be difficult to absorb because of all the territory it covers: musical styles range from hard rock (“A Girl with No Love”) to songs with a more melodic, psychedelic approach. There is not a single moment, however, that could be described as boring; Noctorum captures and maintains the listener’s attention. A stunning duet between Willson-Piper and his wife Olivia, “Head On” calls to mind some of Willson-Piper’s best moments with The Church, but he expands on that sound (especially with the layering at the end), setting it apart from his past work. With some of Willson-Piper’s best guitar playing and Steve Jackson’s tasteful drumming, this song is one of the album’s best.

All the lyrics, written by Willson-Piper, are brilliant and consistent throughout. The continuity between the first song, “Moon Drips”, featuring the line, “I awake to a cold thrill of your face”, and the closer, “In a Field Full of Sheep”, where Willson-Piper sings “And I dragged the sleep out of my eyes/And realized that I had awoken”, demonstrates that the wonder and optimism of the beginning have disappeared by the end of the album. “In a Field Full of Sheep” is an incredible song, full of personal observations such as, “Martin lost his cane last night/He wrote a poem on the kitchen table/And Dare let his coffee go cold/And he said that he just wasn’t able”.

Overall, The Afterlife is Noctorum’s finest work and a welcome return for the band. Hopefully, we won’t have to wait another eight years for a follow up!

Born and raised in Whitby, Aaron discovered music through his love of The Beatles. This led to a career in radio, writing for various publications, and ultimately a radio show about The Beatles (Beatles Universe), which ran for over four years. When not immersed in music, Aaron enjoys spending time with the loves of his life -- his wife Andrea, and daughters Emily and Linda (all of whom have an intense love of music too).
RELATED ARTICLES
a girl with no lovealbum reviewalbum reviews