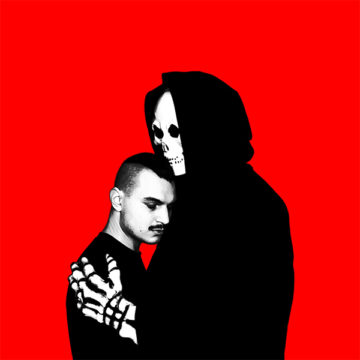 Ephemeral is Mr.Kitty’s seventh studio album. This is electronica in its finest form. Here, however, Mr.Kitty has outdone himself by assembling a 30-track double album about the death of a friend. It sounds heavy because it is heavy. As with Lou Reed’s Magic and Loss (1992) , Mr.Kitty takes an unflinching approach to the subject matter. Quite simply, Ephemeral is the sound of a man coming to terms with a huge loss in his life.

The album is jammed full of incredible melodies and don’t be fooled by the subject matter, as some of the songs come off as a celebration rather than a lament. But it is how the songs are arranged that makes this album so remarkable.

From the opening track  “Wait”, which begins like a choir of angels, until the last stripped down moment of the album, this is a journey through grief and loss, which includes anger and questioning. Mr.Kitty fits the music to these emotions, and it all works from beginning to end.

Lyrically. Mr.Kitty knocks it out of the park. The songs range from remorse, to sad, to angry all points in between. The last song on the album, “I Did It All For You”, which is just Mr.Kitty’s voice, is stark, raw, and truly a bold statement.  “Nothing left to hurt you/May you rest in peace.” These stunning lyrics pack an hell of an emotional punch. And it is the only way he could have ended the album.

This is a long album (30 songs) that should be listened to in one sitting. Some of the songs are standouts and will make great singles, but this is an album. The best way to appreciate it is to listen from beginning to end. Mr.Kitty has created a beautiful tribute to his friend.

Born and raised in Whitby, Aaron discovered music through his love of The Beatles. This led to a career in radio, writing for various publications, and ultimately a radio show about The Beatles (Beatles Universe), which ran for over four years. When not immersed in music, Aaron enjoys spending time with the loves of his life -- his wife Andrea, and daughters Emily and Linda (all of whom have an intense love of music too).
RELATED ARTICLES
album reviewalbum reviewsempty phases
8.0