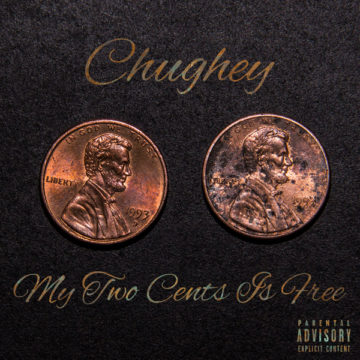 Born in Rock, Michigan, rapper Chughey is back at it again with another project. Having previously released his debut album Pivotal in August 2017, we are now left with a four-track project titled My Two Cents Is Free.

The ambient beats on this album are mixed and mastered well, although it doesn’t help to push Chughey unoriginal sounding flows that we have all heard before throughout other artists.

While it can be difficult to maintain an original feel in the music industry with so much competition in the field, Chughey’s attempt felt poorly executed. Flows run on too long, flows hardly rhyme, and I think I’ve heard many other rappers with a similar sounding voice. Listen to “Loki”, the first track off the album, and you’ll better understand what I mean.

To conclude, Chughey keeps to himself on this album, not going outside his comfort zone which makes for a boring overall sound. Not worth a listen.

The Spill Magazine is a Toronto-based online publication dedicated to covering the independent music scene with a strong focus on our thriving hometown talent. Our writers bring you up-to-date news, in-depth features on musicians and reviews for the latest CD releases. We also travel to the front lines for all local festivals including Canadian Music Week and North by Northeast. Don’t forget to check out our Facebook and Twitter pages for all daily Spill updates.
RELATED ARTICLES
album reviewalbum reviews
7.0