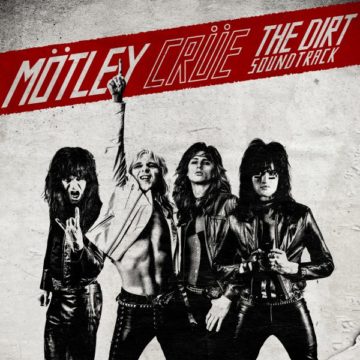 Despite concluding their notoriously jaw dropping The Final Tour back in 2015, Mötley Crüe are more relevant than they’ve been in years with the release of The Dirt. The Netflix film is an adaptation of their 2001 memoir, The Dirt: Confessions of the World’s Most Notorious Rock Band, written by the band with Neil Strauss, and comes with the accompanying The Dirt Soundtrack. While largely a greatest hits collection, the album also features four brand new tracks, recorded in the last year specifically for the film; ultimately making this an incredibly exciting time to be a Mötley Crüe fan.

The hits, making up the bulk of The Dirt Soundtrack and leaning heavily on their 1981 debut, Too Fast For Love, their follow up, Shout At The Devil, As well as featuring quientessential material from 1987’s Girls, Girls, Girls and 1989’s Dr. Feelgood, is a needless reminder as to how great of a band Mötley Crüe were. Few artists have ever consistently captured such a real sense of danger throughout their career. Songs like “Live Wire”, “Shout At The Devil”, “Girls, Girls, Girls” and “Kickstart My Heart”, while sounding distinctively that of The Crüe and the ’80s, still hit hard and demand to be cranked up. While I would have very much enjoyed to hear some unearthed live versions of these hits, the nostalgic flair is strong on The Dirt Soundtrack

Opening the album, curiously, is one of the new tracks, “The Dirt (Est. 1981)”. The track is driven by heavy verses and a very catchy, almost pop chorus whicrec h, when put together, seems to put “The Dirt (Est. 1981)” in between the band’s classic era of work and where they left off on 2008’s Saints Of Los Angeles. The track also features a verse rapped by Machine Gun Kelly, who also plays the Crüe’s drummer, Tommy Lee, in The Dirt, and while brief and packed with aggression and attitude, I feel the song stood stronger without it, however, it isn’t a bad addition. “Ride With The Devil” on the other hand, truly sounds as if it were a lost gem from the ‘80s and is the absolute strongest of the new material recorded for the album. The track is gritty with an irresistibly sleazy and filthy swagger to it. This song kicks ass. Following “Ride With The Devil” is the hard-hitting modern rocker “Crash And Burn” which gives the previous track a run for its money for its sheer ferocity. The Dirt Soundtrack comes to a fairly anticlimactic close with a cover of Madonna’s 1984 hit, “Like A Virgin”. Contrary to the internet’s initial reaction, the track isn’t bad, but like most hard rock/metal covers of pop songs, it begs the question of why, although it does feature a solid bridge and a killer guitar solo.

Despite faltering with “Like A Virgin”, The Dirt Soundtrack is an excellent new addition to Mötley Crüe’s discography. Not only will this reissue of their hits have you digging for your old Crüe records, tapes, and CD’s, but the inclusion of new material will leave lifelong fans excited and hopeful for more to come. If anything is clear, the band seems to have only gotten tighter, with their songwriting skills developing and I would love to see them reunite for a full-length album. However unlikely that may be, I am certain that The Dirt Soundtrack will be on repeat for the foreseeable future. Long live the mighty Crüe!

A passion for music has always been a part of Gerrod’s life. As a young boy, he was raised on a steady diet of the music from The Chili Peppers, Aerosmith, The Stones, Prince, and others from his mum. Raised in the GTA, Gerrod continued to foster his love for music by attending a wide range of concerts and learning the drums. His unapologetic passion for music has no bounds and has spread to a wide variety of styles, whether it be the 90’s rock that sound tracked his teenage years, the jazz he studied in university, or his newfound love for hip-hop. He recently received his bachelors in music and education from York University and is passionate about writing and reviewing good (and less than good) music. Gerrod is also the drummer and songwriter for a Toronto based rock & roll band, One In The Chamber.
RELATED ARTICLES
album reviewalbum reviewslike a virgin
9.0