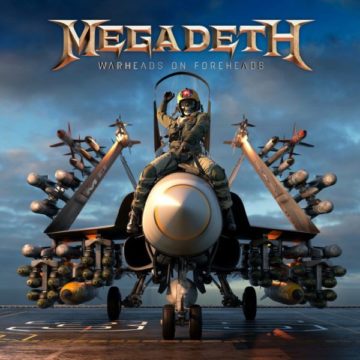 Famous for being in the “Big Four of Thrash” and considered one of the most influential bands in its genre, Megadeth collects its best songs, from Killing is My Business to the Grammy-winning Dystopia, on a boxset that spans three CDs or four LPs.

Warheads on Foreheads is like a history class on Megadeth, explained chronologically and with powerful riffs and drums. In other words, it is a 35-song retrospective representing the 35 years of Megadeth’s career.

Warheads on Foreheads begins with the fast, abrasive thrash song, “Rattlehead”, and finishes with the progressive “Dystopia”. Megadeth fans can find songs like “In My Darkest Hour”, “Hangar 18”, “Tornado of Souls”, “Holy Wars…The Punishment Due”, “Symphony of Destruction”, “Sweating Bullets”, “A Tout Le Monde”, “Trust”, “Head Crusher”, “Blackmail the Universe” and “Tornado of Souls”.

Bandleader Dave Mustaine says that these songs are the most efficient weapons in Megadeth’s arsenal. “WOF (Warheads on Foreheads) is a U.S. military term for targeting efficiency”, Mustaine says. “It’s all about using the right tool for the job and these tracks were created for maximum destruction”.

For Warheads on Foreheads, Megadeth handpicks its best songs for devoted followers, but it is not that different from the 2008 hits anthology, and just seems like a remastered release of those songs.

Sebastian Mahecha is a postgraduate journalism student at Humber College. I’m passionate about music, I enjoy listening to mostly any kind of music, from thrash metal to most underground salsa. Politics and social justice have been of my interest for many years, so whenever a new musician records a song about controversial topics I’ll be there to take a look.
RELATED ARTICLES
album reviewalbum reviewsmegadeth
8.0