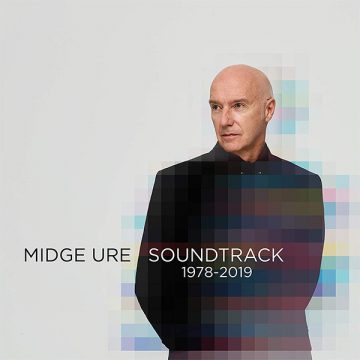 Soundtrack 1978-2019 is not the first compilation to attempt to cover Midge Ure’s incredible career. But what it does do, besides having the hit singles, is provide an insight into his career via some of his deeper cuts from albums even fans may not have heard. This double CD/DVD packaged hits on almost all aspects of Ure’s 40 year career. Oddly enough there are some glaring omissions, such as Slik, Band Aid,  and his work with Phil Lynott. The other confusing aspect of this collection is that it is not chronological. Odd, because had it been, one would have seen Ure’s growth from The Rich Kids through to his most recent release, Fragile (2014).

While the hits are here, they are too numerous to mention, although one does deserve some special attention. A lost gem, “I See Hope (In The Morning Light”). This is Ure’s “Imagine”, and it is a brilliant work of art and was released one year after Major became the Prime Minister of the U.K. after the Thatcher years. Ure was never one to stray entirely away from politics, but in this case it is a song of hope and determination. Remember, this is the man who co-wrote “Do They Know It’s Christmas”.

The hits are all here, but there are also some wonderful album gems, songs that demonstrate that Ure was never afraid to take a beautifully emotional song and add some unique sounds to it. Listen to “The Gift” (1985) and his use of radio to help create a wonderful masterpiece. Elsewhere, one finds Ure’s take on the Queen classic “Nevermore”.

Ure also highlights his collaborations on the collection. Japan’s Mark Karn on “After A Fashion”, Heaven 17’s Glenn Gregory  on “Personal Heaven”,  former Rich Kid Rusty Egan “Glorious”, Christopher von Deylenon “Let It Rise”, and Kate Bush on “Sister And Brother”. While making great music, it also invites the listener to explore these collaborator’s music as most of these songs come from their respective albums. Moby even has a turn of remixing a song from Ure’s most recent studio offering, Fragile (“Dark Dark Night – Remix”) .

Soundtrack 1978-2019 is an excellent collection, with are versions of some of the songs, album cuts and hits. What more could you possibly want? It also serves as a reminder of the genius of Midge Ure. Whether in Ultravox, Visage, or solo, the man has created some of the best-known, best remembered and best songs of the last four decades. His accomplishments are seldom mentioned but let us not forget Band Aid and Live Aid were his co-creation. And the fact that he has included one of the greatest singles of all time in the collection, “Call Of The Wild” makes Soundtrack 1978-2019 indispensable.

Born and raised in Whitby, Aaron discovered music through his love of The Beatles. This led to a career in radio, writing for various publications, and ultimately a radio show about The Beatles (Beatles Universe), which ran for over four years. When not immersed in music, Aaron enjoys spending time with the loves of his life -- his wife Andrea, and daughters Emily and Linda (all of whom have an intense love of music too).
RELATED ARTICLES
album reviewalbum reviewscall of the wild