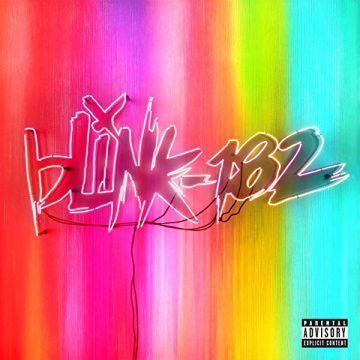 NINE is the eighth studio album from legendary pop-punk trio Blink 182, in which the band emphasizes their pop over punk sensibilities. Like the rainbow neon tinge of its album cover, NINE is bright, it’s sleek, it’s highly-polished and sugar-coated. But not all that glitters is gold, as is the case here.

NINE follows suit of California’s more mature, introspective themes, expanding on an emotional front. Songs about dick jokes are replaced by songs about loneliness, depression and regrets. “Angel wings at the bus stop / Halos left on top of the bar / Heaven doesn’t want me now,” Hoppus sings on the heartfelt “Heaven.” This moody darkness permeates NINE, but is balanced out by enough upbeat radio-friendly anthems to jolt listeners back to a happy state of mind.

There are a handful of gems scattered across the record’s tracklist. “Pin the Grenade” is a standout arena anthem with a sing-along chorus, followed by the album’s fastest track “Generational Divide” with its short fuse and even shorter runtime, clocking in at 49 seconds, sadly. And, to no surprise, Barker absolutely slays the drum work across the board, a tribute to his status as a madman behind a drum kit.

Between the peaks and valleys are plenty of duds. Included among these are the lead single “Blame It On My Youth,” “Darkside” and “Hungover You.” They’re not all awful—some are even repetitively catchy and hooky—but not worthwhile either, weighed down by ultra-processed bells and whistles that prove to be unnecessary distractions.

At its best, NINE is catchy but forgettable pop-rock candy that’s too sweet for its own good.