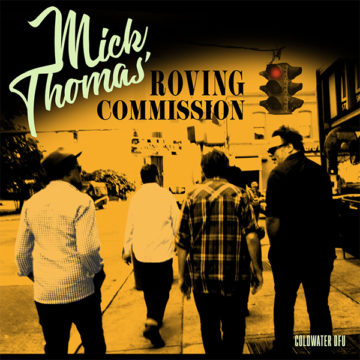 Weddings, Parties, Anything called it a day, for all intents and purposes in 2012, but in terms of new music, their last studio album was released in 1997. Since then, Mick Thomas has recorded and released several albums, some solo, some with The Sure Thing and more recently with his band The Roving Commission (which includes  former Weddings, Parties, Anything accordionist Mark ‘Squeezebox Wally’ Marcus). Coldwater DFU is actually the debut album for Mick Thomas and The Roving Commission, and it does not disappoint.

Coldwater DFU was recorded in Memphis in Jim Dickinson’s Zebra Ranch Studios, where Weddings, Parties Anything recorded The Big Don’t Argue (1989). Dickinson also produced that album, but has since passed away. For Coldwater DFU, Dickinson’s son Cody Dickinson and engineer Kevin Houston helped with the production of the album. They know how to produce Thomas and his band and get the absolute best out of this band. Although it is their debut album, you would swear that have been playing together for more than a few years. They are a tight and unified force.

As for Thomas, his could very well be the best album that he has released. There are some older songs here (songs previously issued as singles) but overall this is a fantastic album. It is one that needs to be played from beginning to end and leaves one wanting more when the last note is heard. Coldwater DFU is country, folk and rock all rolled together by Thomas and it is clearly his vision that is coming to life here.

The songs are melodic, memorable, and heartbreaking. There is still the Thomas humour here, but as usual, he tells stories about people who try to succeed in life but get sidetracked, and stories about loss. Both themes that Thomas has visited in the past. Here he seems to dig deeper and makes the stories a little more painful.

Thomas also tries new styles, such as the song “Anything You Recognize”, which tips its hat at the old recitation songs of long ago. Here Thomas is acknowledging changes to his native Australia and this style works perfectly for the song. It is brilliant and conveys a great deal.

Thomas seems to have come into his own with The Roving Commission (which also includes Ben Franz and Dave Foley) and has allowed him to carve out his own new distinct sound. Sure, there are hints of Weddings, Parties, Anything and his prior solo stuff, but this album stands alone from his other work, as a new beginning. It is an excellent and brilliant way to start.

Born and raised in Whitby, Aaron discovered music through his love of The Beatles. This led to a career in radio, writing for various publications, and ultimately a radio show about The Beatles (Beatles Universe), which ran for over four years. When not immersed in music, Aaron enjoys spending time with the loves of his life -- his wife Andrea, and daughters Emily and Linda (all of whom have an intense love of music too).
RELATED ARTICLES
album reviewalbum reviewsmick thomas
9.0