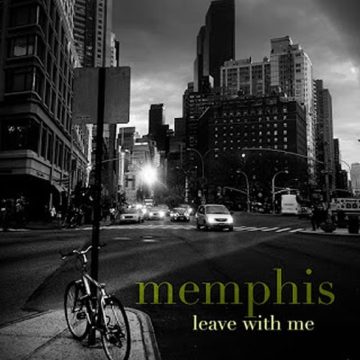 Memphis
Leave With Me
Independent

Memphis, the duo consisting of long-time friends Torquil Campbell and Chris Dumont, give us their fourth album, Leave With Me.

Dumont and Campbell have been friends for 25 years. Dumont was a member of Campbell’s first band, along with James Shaw (Metric) and Chris Seligman (Stars).

You’ll recognize Campbell, of course, as one of the distinctive voices of the Canadian group Stars. He and Dumont have created Memphis based on their friendship, with “no ambitions beyond making something beautiful to remember each other by”.

This brooding and melancholic release, with a runtime of just under 30 minutes, offers eight wonderfully produced and performed songs. “Leave with Me” displays a strong indie rock guitar influence, along with a vast assortment of complimentary instruments including synths, trombone, saxophones, and violin.

One standout is the opening track, “Faith”, where Campell uses his sweet voice to reflect on depression and the quest for hope and faith. The influence of Morrissey and The Smiths can be heard in the graceful approach to such weighty subjects.

The fourth offering, “Dusty”, is a dreamy instrumental interlude, in honour of the late Dusty Springfield. Interestingly, one of Springfield’s highest-regarded releases, 1969’s Dusty in Memphis, was recorded in… you guessed it, Memphis. This homage features snippets of Springfield’s distinctive, innocent voice, as recorded in the documentary Just Dusty. “Dusty” is a magnificent horn-driven song which captures the magic of this English legend.

The fifth song and first single from the album is the indie rocker, “You Never Really Knew Me”, which reflects on the disappointment of a distant relationship. Campbell sings of “fading from memory” as he moves away from the letdown which invariably comes with most relationship attempts.

Leave with Me is a strong, emotionally driven release, sure to please the listener with each passing song. The duo of Dumont and Campbell creates something very special, developing a dichotomy between sorrow and joy. We all benefit from their friendship on this majestic offering.

The album is available for purchase online, with the hope of a vinyl release in the future.

John Graham is a Vancouver-area resident who typically spends most days admiring music of all genres. When not listening to music, John is usually at a live show, somewhere in the bowels of Vancouver.
RELATED ARTICLES
album reviewalbum reviews
9.0