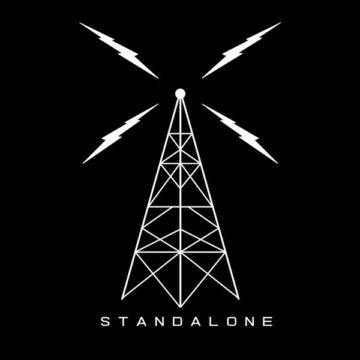 Standalone is Steven Siebold (Hate Dept, Pigface), and the name is pretty self-explanatory. This is a solo project in every sense of the word, as Siebold is the only one on the album. Standalone is an electronic album, mixing 1980s synth with modern electronic dance music. It is much more melodic and accessible than one would expect from a guy that plays with Hate Dept. Though the album is not mellow by any means, the songs are more melodic and less heavy.

Siebold’s creative choice of sounds throughout the album keeps it interesting. On the opening song, “Destroy Yourself”, he uses what sounds like a toy piano, creating a wonderfully innocent, almost wistful sound before the lyrics and instrumentation kick into high gear. As the song quickly gets darker, the contrast is jarring, but it serves as a brilliant kickoff for the album.

“The Building Song”, which could have been a run-of-the-mill electronic song, is transformed into a menacing cacophony through its drilling sound effects. With these techniques, Siebold sets the tone for the spoken word part: “With no directive or intent/This creation was clumsy, aimless/Beautiful but lost”. These words say a lot, especially in the context of the ominous music.

The album also excels lyrically; Siebold, through his eloquence and economy of words, finds beautiful ways to express his dark themes. For example, the last track, “Sing”, includes the line, “There’s no answers here/Just broken things I can’t say, I’ll sing”, which sums up both the album and maybe life in general.

Fans will enjoy this album, which is perhaps Siebold’s best work.

Born and raised in Whitby, Aaron discovered music through his love of The Beatles. This led to a career in radio, writing for various publications, and ultimately a radio show about The Beatles (Beatles Universe), which ran for over four years. When not immersed in music, Aaron enjoys spending time with the loves of his life -- his wife Andrea, and daughters Emily and Linda (all of whom have an intense love of music too).
RELATED ARTICLES
album reviewalbum reviewsnegative gain records
9.0