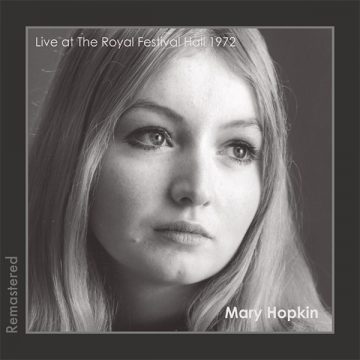 This concert, and album, have a remarkable history. The show was originally designed as Mary Hopkin’s farewell to show business, thankfully that would not be the case, as she continues to release brilliant music to this day. Supporting Ralph McTell, she had a stellar back-up band consisting of future Strawbs member Brian Willoughby (who was recommended by Dave Cousins of the Strawbs), Danny Thompson (Pentangle), Tony Visconti (who happened to be married to Hopkin at the time) and the Pop Arts String Quartet. The set was recorded and as was originally released by Hopkin’s daughter Jessica Lee Morgan on CD in 2005, when it promptly sold out. In 2020, Hopkin’s son, Morgan Visconti, using technology that was not around in 2005, has cleaned up the tape and the end result is a beautiful recording of an historic concert.

The show is historic, in that, Hopkin did not perform live much after this show and so, although not a goodbye to music, it was goodbye to the stage. And the music they perform is outstanding. Opening the concert (and album) with the beautiful “Once I Had A Sweetheart”, a traditional folk song that Hopkin never released in studio form. A pity, because her arrangement and vocals are simply beautiful. Although she does a number of songs from her then current album, Earth Song/Ocean Song (which had been released in 1971 on Apple Records), she also performed many songs she never recorded.. In concert, the songs are much more bare and stripped down. This works remarkably well, especially with a song such as “Ocean Song”, which is much more melancholic and sparse on the stage.

Her choice of material is spectacular. Here we get to hear her perform “Sparrow”, a B-side from 1969, and “International” (from her Earth Song/Ocean Song album). Both written by Gallagher and Lyle and both perfectly suited for Hopkin and the arrangements. “Sparrow” always brings a lump to my throat in its sublime beauty. She also performs McTell’s “Streets Of London”, which is as good as his original version. He notes in the liner notes that he wished he had joined her on stage, as do I. That would have been a wonderful duet (she did sing on his most recent release, 2019’s Hill Of Beans). She, of course, does her signature song “Those Were The Days”, but it is her choice of covers, such as “Morning Has Broken” and “Both Sides Now”, where she is at her best and clearly enjoying herself. It is a joy to hear.

The new version of the CD comes with a great booklet, where all those involved reminisce and it is quite a welcome addition. Live At The Royal Festival Hall 1972 is an incredible album. The playing is top notch, and Hopkin sounds confident and sings beautifully. She interprets songs and makes them her own. It is well recorded, and beautifully packaged. Hopkin can and should be proud of this CD and her remarkable catalogue of music. This is a wonderful chapter, in her career and in 1970s English Folk Music.

The CD has been put together with a great deal of love and respect for Mary Hopkin and the concert. It is a joy to listen to, almost 50 years later, and it makes one wish they could have been in the hall. It shows the gentle power of Hopkin, her voice and her keen sense of arranging well-chosen songs. An absolutely brilliant album.

Born and raised in Whitby, Aaron discovered music through his love of The Beatles. This led to a career in radio, writing for various publications, and ultimately a radio show about The Beatles (Beatles Universe), which ran for over four years. When not immersed in music, Aaron enjoys spending time with the loves of his life -- his wife Andrea, and daughters Emily and Linda (all of whom have an intense love of music too).
RELATED ARTICLES
album reviewalbum reviewsmary hopkin
8.0