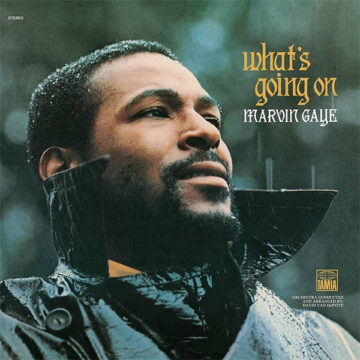 Originally released in May of 1971, What’s Going On was Marvin Gaye’s 11th studio album. Not only was it a departure from the music he had been making up to 1970 (his 10th studio album was the wonderful That’s The Way Love Is, a more conventional album of love songs), but also one of the most important albums released that year, if not the decade. Gaye produced a concept album about a Vietnam war veteran returning home to a world of discord. On this album, he very frankly wrote about drug addiction, poverty, ecological concerns and, of course, the Vietnam war. It was a long way from “How Sweet It Is To Be Loved By You”.

What’s Going On was a huge success and has made many “Best Albums Of All Time” lists, and it should. It was a landmark album and it took rhythm and blues and Motown to a whole new level. From the opening title track to the closing of the last song, “Inner City Blues (Make Me Wanna Holler)”, Gaye brought the issues of the inner city and racism to middle class America. Here was an artist famous for his love songs singing about saving children, not unlike Lou Reed with his album Berlin. Gaye is not afraid to sing about subjects that had not been played on mainstream radio. Sure, there had been protest songs in the past, but this was different. He set very heavy lyrics to incredibly strong melodies. Gaye mixed genres as well. Jazz flows with lush orchestrations that come close to classical mixing with rhythm and blues and rock. Gaye utilized the famous Funk Brothers but he added his own piano and mellotron. The mix of different sounds and styles makes this album very distinct in Gaye’s catalogue. In many ways it was very experimental to see how far he could push his music without musically alienating his fans. And he succeeds. Singing a deeply personal song, such as “What’s Happening Brother” but not writing overly sentimental music to accompany the lyrics about soldiers returning from Vietnam, which he dedicated to his brother.

This album has been re-released many times with various bonus tracks. This set, a double album, includes the second album of single mixes (in glorious mono), stripped-down versions, a demo and “Marvin Gaye x Salaam Remi: The Remix Suite”, which includes “Save The Children” from the original album, as well as “Sad Tomorrows” (a B-side added to the CD version of the album), “No Need” (previously unreleased) and “I Want To Come Home For Christmas” (a song recorded in 1972, but not released until 1990 on a compilation).

While the second album has some very nice treasures, such as the “The Remix Suite”, it may be of interest to die-hard fans only. The mono mixes of the singles are fantastic and present the songs in slightly different form and the stripped version of “What’s Going On” is very stirring but again, not for everybody. However, it is great to have.

Overall, a brilliant re-release of an absolutely classic album. As original copies in mint condition get harder to find every day, this set is nice to have. The album always sounded better on vinyl and the mastering is quite flawless. We get to hear Gaye’s incredible voice again as he sings some very impressive introspective and politically charged songs. What’s Going On is a bona fide classic. It is the sound of an artist questioning about his community and how that community fits into 1971 America. Sadly, many of the sentiments expressed on the album are as relevant today as they were 50 years ago.

Born and raised in Whitby, Aaron discovered music through his love of The Beatles. This led to a career in radio, writing for various publications, and ultimately a radio show about The Beatles (Beatles Universe), which ran for over four years. When not immersed in music, Aaron enjoys spending time with the loves of his life -- his wife Andrea, and daughters Emily and Linda (all of whom have an intense love of music too).
RELATED ARTICLES
album reviewalbum reviewsmotown
8.0