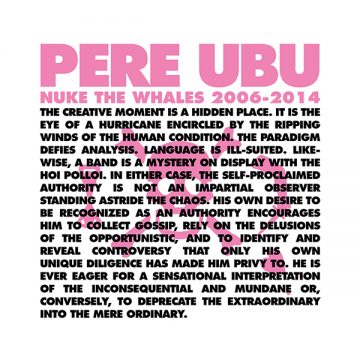 Nuke The Whales 2006 – 2014 is the latest installment of Fire Records’ re-release of the Pere Ubu catalogue. For this set, they are focusing on four albums released between 2006 and 2014. The title is indicative of Pere Ubu’s attitude towards music. It has to be said, they are not everyone’s cup of tea, and for some, their avant-garde approach to music and lyrics may be a bit much. Their music can be somewhat to grapple with, but under all the layered sounds one can find solid music, strong melodies and intriguing lyrics.

I have always been a fan, but not overly familiar with this time period. This collection is perfect for people like me to listen and develop an appreciation for this late period in Pere Ubu’s career.

This box set contains Why I LUV Women (2006), Long Live Père Ubu! (2009), Lady From Shanghai (2013) and Carnival Of Souls (2014). These are not held in the same regard as their classic period of Pere Ubu (1975-1982) but in fact, these four are every bit as good as, say The Art Of Walking, and I am glad Fire has rereleased them. They have been remixed by David Thomas and remastered by Brian Pyle, and in doing so they have made them sound as contemporary as anything released today. They sound great!

Why I LUV Women , in many regards, is conventional rock, however here Thomas throws curveballs. Just when you think you know where he is going, he shifts gears. “Love Song” is a perfect example, which starts off as a conventional rock song, but by the end it is a free for all, complete with amazing synthesizers thrown into the mix. It is interesting and captivating, and brings the listener into Thomas’s world. Why I LUV Women makes its vinyl debut in this box set, and may be the album that most interests collectors and fans. It is well worth the time to listen.

Long Live Père Ubu! is perhaps their most ambitious and experimental album in the Pere Ubu catalogue. It is basically a punk version of Bring Me The Head of Pere Ubu, David Thomas‘s adaptation of Alfred Jarry‘s Ubu Roi. Featuring Sarah Jane Morris of The Communards on vocals, this is a wild adventure into classic theatre. It is remarkable and has aged remarkably well. It seems to make more sense and I sincerely wish I had seen the band perform this live.

Four years later, Thomas unleashed Lady From Shanghai to an unsuspecting public, which is unlike the previous two. It opens with “Thanks” and the lyrics “You can go to hell, go to hell. My bad, go baby”, which is quickly followed by “Free White” where Thomas declares “it’s a beautiful world”. The album has its angry moments but quickly moves to other emotions. It is a mixed bag and, in some ways, has more in common with older Pere Ubu than with the music they had recently been releasing. It is experimental and very engaging. It is the type of album that one keeps on to see where Thomas is going next. A strong album and its return is most welcome.

The fourth and final disc, 2014’s Carnival Of Souls, takes its title from the classic 1962 cult classic. Quite frankly, it is scary at times, with its metal guitars, whispered and murmured vocals and all sorts of sounds. While it is not based on the film, it could easily be its soundtrack. It is no wonder that a couple of the songs were used in American Horror Story. It is not for the faint of heart. Once again Thomas demonstrates that he has a great deal to say and very creative ways in which to say it.

This is a well thought-out and expertly assembled box set highlighting four very adventurous albums in Pere Ubu’s immense catalogue. David Thomas and company never failed to impress, intrigue, and amaze their listeners and fans. Again, the albums are not for everybody, but for those who enjoy their own brand of avant-garde rock, this is a fantastic set to add to your collection.

Born and raised in Whitby, Aaron discovered music through his love of The Beatles. This led to a career in radio, writing for various publications, and ultimately a radio show about The Beatles (Beatles Universe), which ran for over four years. When not immersed in music, Aaron enjoys spending time with the loves of his life -- his wife Andrea, and daughters Emily and Linda (all of whom have an intense love of music too).
RELATED ARTICLES
album reviewalbum reviewsfire records
8.0