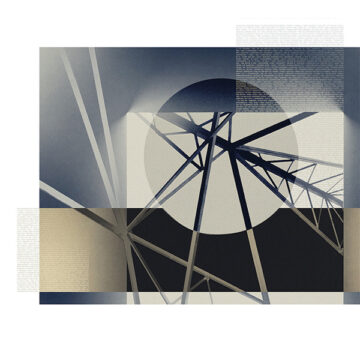 When Brian Eno left Roxy Music, after their second album (For Your Pleasure) in 1972, and released his debut solo album, Here Come The Warm Jets, print ads appeared in the British press ‘Eno Sings’, a parody of ‘Garbo Speaks’ when Greta Garbo made her first talkie. Eno eventually moved into ambient music, a genre he created, and over years, albums featuring Eno singing became fewer and farther between. His new album, FOREVERANDEVERNOMORE is a case in point. This is his first vocal album since 2005’s Another Day On Earth. That does not mean that this is a straight ahead rock album. Far from it. Eno continues to experience with sound, layers and on this album, vocals.

Eno has written that the album comes from his feeling about the future, or lack of future, for this planet. He is not preaching on FOREVERANDEVERNOMORE but rather expressing his feelings about the current state of things. From the first track, “Who Gives A Thought”, a song that sounds like his ambient work, until his voice comes in “Who gives a thought the fireflies”  he sings, and the album begins. This line is followed up later by asking about other aspects of nature, but in Eno’s world, there isn’t time these days to study nature and “germs of no commercial worth”. This is followed by “We Let It In”, a wonderful song layering vocals (besides Eno, vocals on the album feature his daughter Darla and niece Cicely). The song has a lasting impact and instantly hits the listener.

This is a heavy album to enjoy. In fact, the album is best enjoyed by listening from beginning to end with minimal distractions. This album demands and deserves the listener’s attention. Each song flows into the next. There really is not a wasted second. The lyrics are as important as the music, and to these ears this is very much an ambient album, just featuring vocals. The lyrics are some of the best he has written. Listen to “Garden Of Stars”, and hear Eno express his concerns for the state of the world. “These billion years will end,” he sings, “they end in fear”.

Eno does not offer solutions, but again, that is not the point. This album, according to Eno, is about feelings, and that comes across in the lyrics and the music. Ambient music makes its appearance, with songs such as “Inclusion” and the epic closing song “Making Gardens Out Of Silence”. It is an incredible eight minutes of beauty and sadness. And the perfect way to end the album.

Eno does get help along the way for the new album from  his brother, Roger (with whom he recorded 2020’s incredible Mixing Colours), as well as Leo Abrahams, Jon Hopkins, Peter Chilvers, and Clodagh Simonds.

Eno has stated that this is his 22nd solo album. That is a conservative number, just google his lengthy discography. And FOREVERANDEVERNOMORE is a welcome addition to his growing collection of music. It is so good to hear Eno sing again, as he is one of the finest vocalists of the past 50 years. FOREVERANDEVERNOMORE is a brilliant album, it is dark and dense, but ultimately extremely beautiful. Eno is looking out for the world by looking inward. Musically and lyrically it is close to perfect.

Born and raised in Whitby, Aaron discovered music through his love of The Beatles. This led to a career in radio, writing for various publications, and ultimately a radio show about The Beatles (Beatles Universe), which ran for over four years. When not immersed in music, Aaron enjoys spending time with the loves of his life -- his wife Andrea, and daughters Emily and Linda (all of whom have an intense love of music too).
RELATED ARTICLES
album reviewalbum reviewsbrian eno
8.0